a small animal with grayish black fur, black patches around the eyes, and a long bushy ringed tail

"Raccoons are large mammals, most often seen dead on roadsides ( poor babies ) or at night going through garbage cans. They are shy creatures, active at night." ( Somebody want to tell this fella it's day time? ) 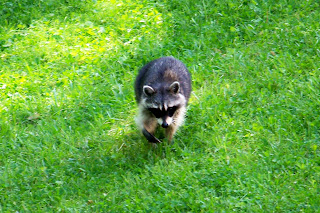 "Raccoons benefit people by controlling animal and plant populations. A raccoon may eat an entire wasp nest, including larvae, or eat all of the berries from a Poison Ivy plant, keeping it from spreading. Of course, sometimes they poop out the seeds in a new place, and Poison Ivy grows there". ( lol, more than I might need to know, but OK : currently itching from some poison ivy...now to be thought of as raccoon poop!) 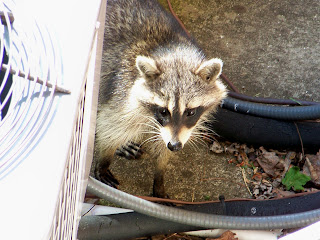 "Raccoons are very agile. They climb trees well, moving forward or backward on their way up or down the tree. They are one of few animals which can descend a tree headfirst". ( They also can scale brick walls as I have had them up on my balcony!! ) 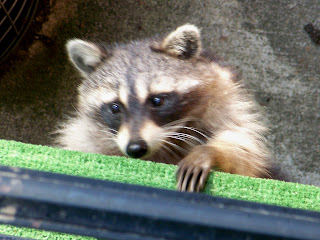 "Raccoons are known for making a variety of sounds, including purrs, whimpers, snarls, growls, hisses, screams, and whinnies". To hear some of their sounds, click here.  ( If you want to hear the sound I hear most often it's the "raccoon complaint" sound when they are arguing over who gets the bird seed from my downstairs neighbor! )

And speaking of my neighbor: She hates squirrels ( I feed them ) she hates raccoons ( and I was thrilled to be getting this little guy on camera! ) So you can see we have a different opinion, so here I am, hanging off my balcony trying to get a shot of him and out comes Jo from below brandishing a broom, banging it on the porch and yelling....and there I am, standing ever so silently, praying she doesn't know I'm out on my balcony, pretending that I am not letting this raccoon get onto her porch just so that I can get his picture...::Innocent look::
Posted by SandeeNC at 12:00 AM

OMG! Are you serious?! The raccoon came that close and climbed up your balcony?! That is just amazing Sandee. What an awesome moment and photo op! I'm sending you an email separately. My internet is working!--Pat

Not that you'll see my comment, but cute pictures.

Hehe. They are so cute but so destructive. I'm sure you had fun photographing him.

I've been away for a while but back crafting now for the next couple of weeks!
hugs,
Ellen

We have had a power faulure today so hope you don't get 3 messages from me. I love those little furballs, they look like bandits. Great photos. Hope you are having a good weekend.

You do know that it's the rabid ones that come out during the day, right?

OK, this one might be cute and all, but I have NEVER liked raccoons. They not only kill wasps, they also "control animal(s)" (your words) which could include my precious Bleubeard. And I'll take him any day over a raccoon.

I had a neighbor who owned a cat she left outside and a raccoon killed the cat by grabbing it on the inside of the neck and tearing the flesh away. I tried to chase the raccoon away, but it was too late for the cat. I was the one who had to tell my neighbor AND call animal control to take the cat away, since I was worried the raccoon might have rabies.

If it's any consolation, I DO love squirrels and have a ton of them living in my trees and running through my yard.

You are right. I see the quotes, now. Just didn't know what I was quoting (grin).

And YES, Bleubeard may come for a visit. Are guest animals allowed? He has his current rabies inoculations, so he would probably be safe around the raccoon.

Thanks for this link. So funny. Ok so they can climb. Clever things x