20th Anniversary of Chalk it Up! mural in downtown Hendersonville, NC

10 artists gathered EARLY ( OK, 7am may not be that early for some, but it is to me! ) to work on a chalk art mural for the 20th anniversary of Chalk it Up! in Hendersonville, NC We had a design gridded out so each one of us was responsible for one section. 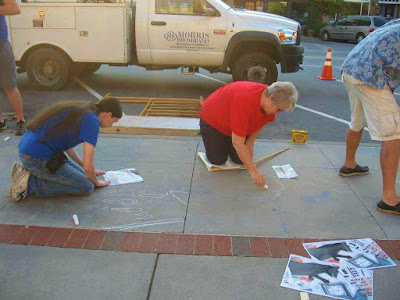 The scaffolding( that you see at the top of the picture ) at the end holds a camera directly over us to take time lapse pictures of our progress ever 5 seconds. Video can be found HERE. 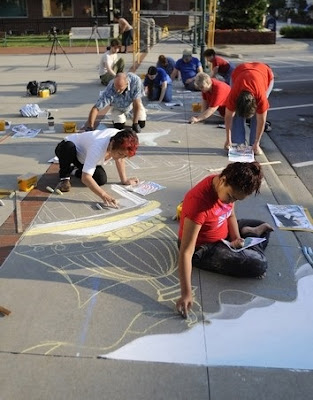 The weather cooperated with us very nicely but it did start to get hot about this point, muscles were hurting and everyone was getting tired. Believe it or not, it took us 3 hours to complete! 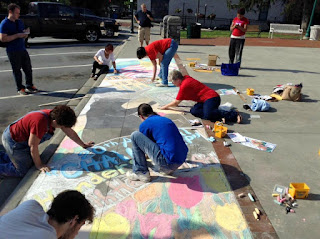 I did the bear and had the least available chalk as black was in short supply. I was allotted all the black chalk and had to use water to "melt" the chalk into the concrete surface of the sidewalks to try and extend the color. It worked pretty well too, although my fingernails and cuticles still have remnants of black chalk the next day that no amount of washing and using a nail brush seem to have any effect. 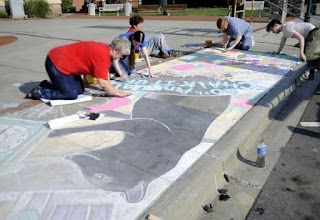 This is my portion of the sidewalk. 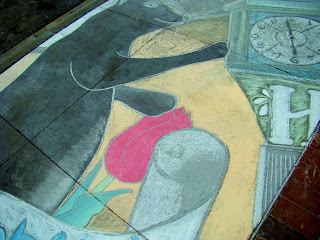 Here is the top ½ which features our mountains, courthouse and a portion of the town along with our historic clock. 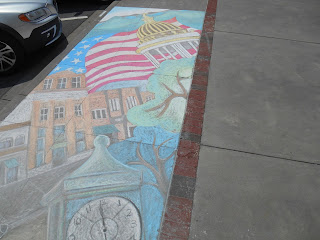 And the bottom portion. 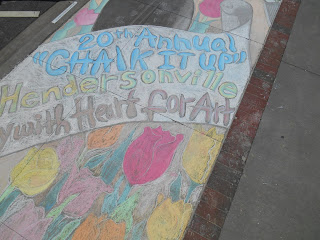 I hope I get a still photograph from the scaffolding above, but in the mean time, this is it. If you would like to read the newspaper article about the days event you can do so HERE! 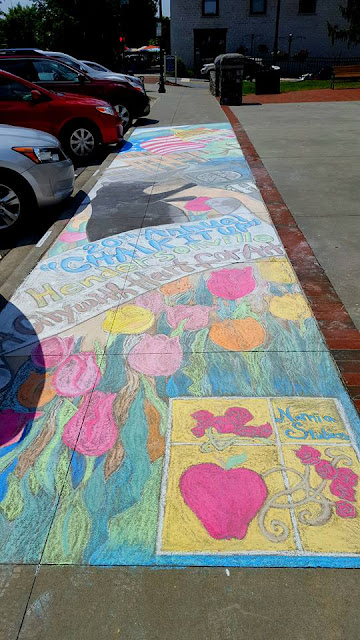 And here is a picture that was printed in the newspaper. 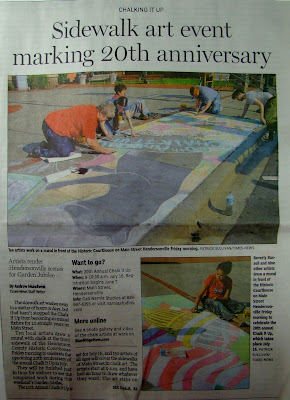 Now off to take some more Alleeve, my knees are fine which everyone worries the most about but I have lots of sore muscles from stretching across the drawing and working, lol
Posted by SandeeNC at 10:53 AM 3 comments:

Email ThisBlogThis!Share to TwitterShare to FacebookShare to Pinterest
Labels: Chalk it Up!, Hendersonville NC, mural

Please take time to hop through all the great blogs of our designers for inspiration. Go back to the Gel Press™ blog and leave a comment as to which blog gave you the most inspiration!  We will draw a random winner from the comments to win a prize from Gel Press™!!! 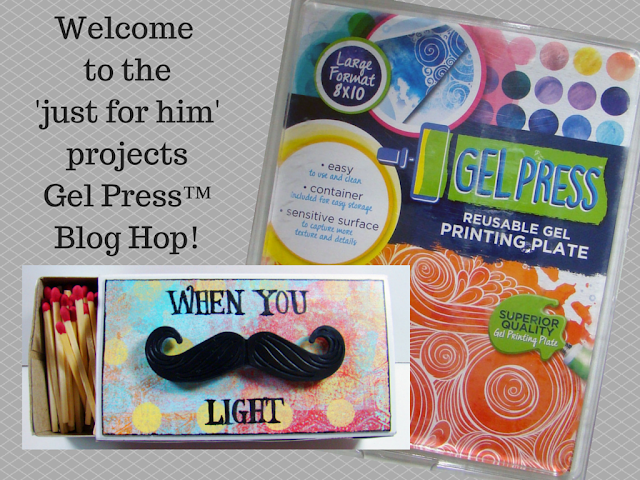 I don't know about you but when the lights go out I am automatically scrambling for flashlights or matches! There is nothing more confounding than not being able to find either in an emergency, so my solution is to take a matchbox and stick it to the refrigerator with a magnet! 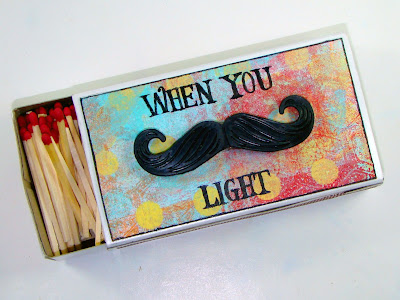 1. Re-design your box if necessary
The first thing I did was take apart the outside cover because it wasn't aligned as well as I wanted it to be considering it was going to end up as a small work of art hanging on the side of my fridge. This isn't a step that you might have to take, I'm just very picky.
2. Select your print
The next step was to measure and cut one of my Gel Press™ prints to cover the wording on the box. 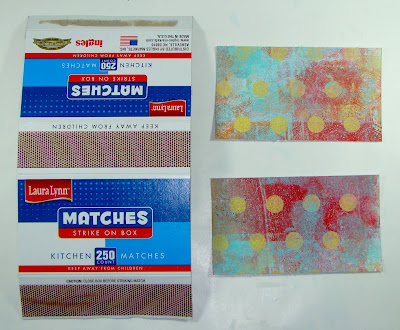 3. Glue on your covers.
I did one for the front and back of the box, which again is a personal preference since the back doesn't show. It is not necessary to do, but something I wanted to do.
4. Attach a magnet to the bottom of the box.
However, you can also cover the bottom entirely with the magnetic sheet if you wanted to.

5. Decorate the sides of the matchbox.
I also covered the sides of the box in the same  Gel Press™ print, it seemed a shame to waste all that gel print goodness, plus it makes the box nicer to look at from all angles.

I did NOT cover or get anything close to the striking plate and I recommend the same thing.
**** Please, always put safety first. ****

6. Embellish
The last thing to do is to decorate the cover.
I chose to do a Rebus:
A rebus is an allusional device that uses pictures to represent words or parts of words. 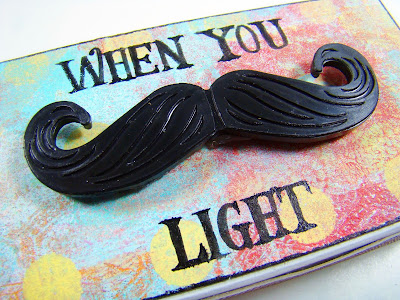 When you 'Mustache' (must have) light.

But, I also put together some fun puns too if you don't want to do a Rebus...


The pun, also called paronomasia, is a form of word play that suggests two or more meanings.


You light up my life.
Love struck.
We met on match.com
We're a perfect match.
Match made in heaven.
You're hot.
Let's turn up the heat.
Hotty.
Come on baby, light my fire.
I have a burning desire for you.

Want a bonus chance to win a prize from Gel Press™?  Between now and Father's Day (June 19, 2016) create your own "Just For Him" project and post it on our Facebook page Gel Press Junkies!  Everyone that plays along will be entered in a drawing as well.  Yes, we would love you to use a Gel Press™ in your entry- but you don't have to! Just make a fabulous project featuring Fathers Day and post it!  Maybe you will win a Gel Press™!
To Qualify for the drawing:
1) You may enter a maximum of 3 times with individual projects.
2) You must by 18 years old.
3) You must live in the USA.
4) Mentioning other products or other companies in your post disqualifies your project.
Posted by SandeeNC at 2:00 PM 7 comments:

Using native plants to restore the landscape or as a substitute for exotic ornamental plantings can help to reverse the trend of species loss. And this has been my goal recently. I admit, it's difficult not to be swayed by the showy exotics that you see but more and more nurseries are starting to offer native plants which makes it a little easier on the average gardener. And that is what I am, an average gardener who just likes pretty things, trying to make the world a little bit better one plant at a time.

So I decided to make (another, yes I have more than one) plant journal, this one to showcase all my natives that I have been steadily seeking out to put in my flower bed by combining my love of Gel Press™ printing, water-coloring and book binding. You can visit the Gel Press™ blog and/or go see my video I made :) 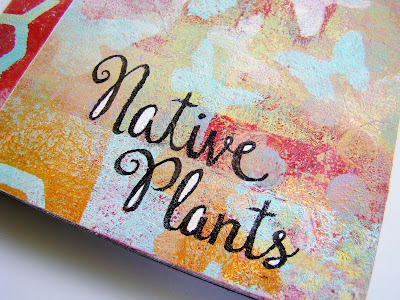 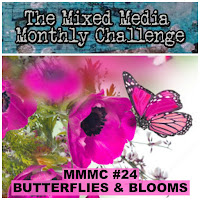 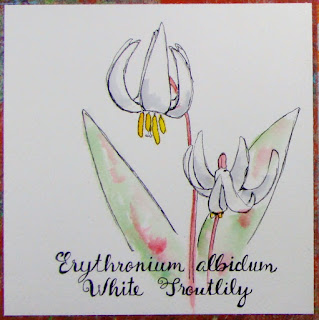 I love my friends and I really love how they become involved with me on my art projects. One of friends' gives me molds and art supplies to help me out with my Creative Paperclay design team because when I joined up with them I had no tools....at all! Thank you Jamie for your lovely gifts of inspiration, these little flower push molds have been such a lifesaver, just like you! 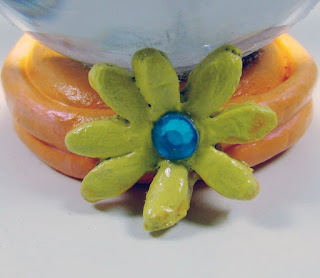 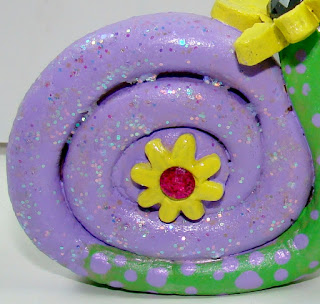 And I could never be where I am without my other faithful friends who are always there, leaving me comments on the designer blogs which really encourage me and make me smile. Thank you Jean, Anne, Pamela and Tamiko for always being there for me.

Please hop over to the Creative Paperclay blog so you can see my Fairy Garden accessories I made, and I always appreciate anyone who takes the time to leave me a comment.
Posted by SandeeNC at 10:00 AM 4 comments: