I just realized it's been over 3 weeks since I last posted. It was a mad push and lots of parties to get the Bearfootin' Bear completed. And then afterward I just relaxed and relaxed, it was wonderful.

So here's a recap of this month 👀

First thing was giving away a piece of my art to Alta Davis. She won it during a small contest I ran after the Artscape art show was over. 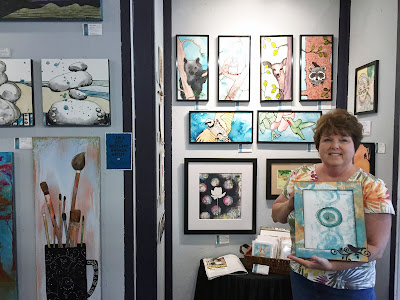 And yes, I am back to being in a booth now, and thank you Jamie for helping me to hang the lights!

I discovered a new tea house called A Southern Cup of Tea which a group of my girlfriends met for an "afternoon tea". It was delightful and I need to go back soon! 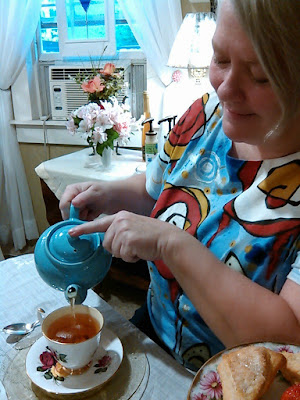 My friend Jamie wanted to visit Malaprops bookstore in Asheville. It's not often you can go to a bookstore, get tea and scones or a glass of wine! While she explored I sat and ate and sketched. 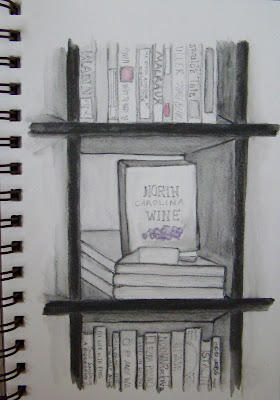 Then, of course, came the big Bearfootin' Bear reveal...

Then came the rain, lots of rain, so I spent my time indoors playing with some new StencilGirl stencils ( I can't tell you about them yet, they won't be revealed until July!) and making an ATC for the Grumbacher trade. The theme is voyage this month. 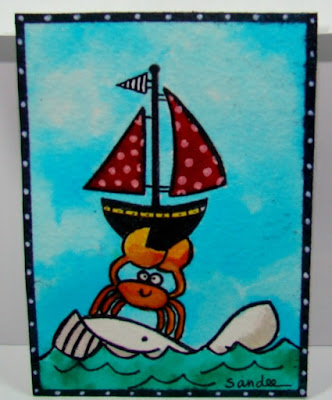 The rest of the time I spent Netflix binging and drinking tea on my porch reading. 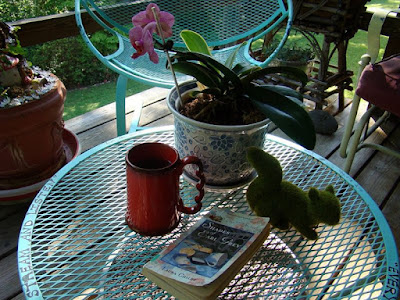 Yes, life has been good to me but it's been great to just sit back and chill. 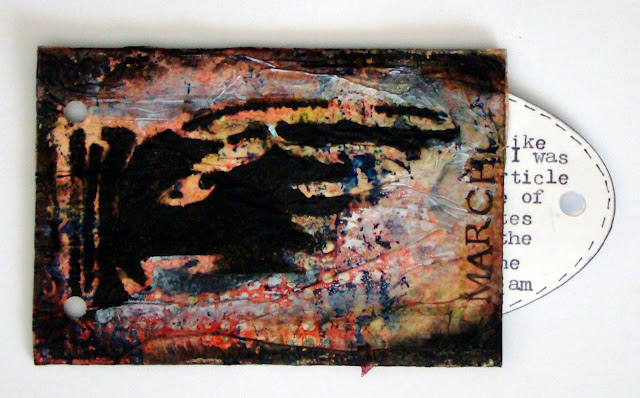 I'll need to retype this one, lol LOTS of typing mistakes! Trying to do something in a hurry is NOT good when you are NOT a good typist. I'm really not sure if it's my ole age or my dependency on technology that has made me such a typing diaster...or maybe it's a combination of the two?


Here is a picture of my friend Jamie reading the article. She came to visit me for the art show. It's lovely to have a valued friend like her. 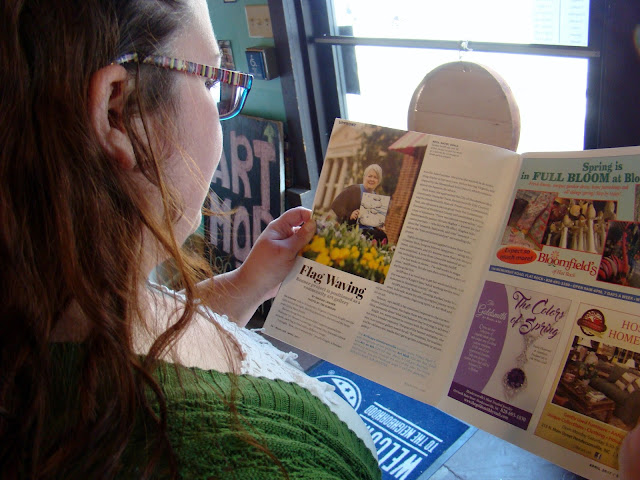 I'm rather fortunate to have been in one of our local magazines approximately once a year, I may not be big and famous
and probably never will be,
but I do get my Andy Warhol moments:

"15 minutes of fame is short-lived media publicity or celebrity of an individual or phenomenon. The expression was inspired by Andy Warhol's words "In the future, everyone will be world-famous for 15 minutes", which appeared in the program for a 1968 exhibition of his work.  Photographer Nat Finkelstein claims credit for the expression, stating that he was photographing Warhol in 1966 for a proposed book. A crowd gathered trying to get into the pictures and Warhol supposedly remarked that everyone wants to be famous, to which Finkelstein replied, "Yeah, for about fifteen minutes, Andy." The phenomenon is often used in reference to figures in the entertainment industry or other areas of popular culture, such as reality television and YouTube"...or maybe your hometown magazine :) 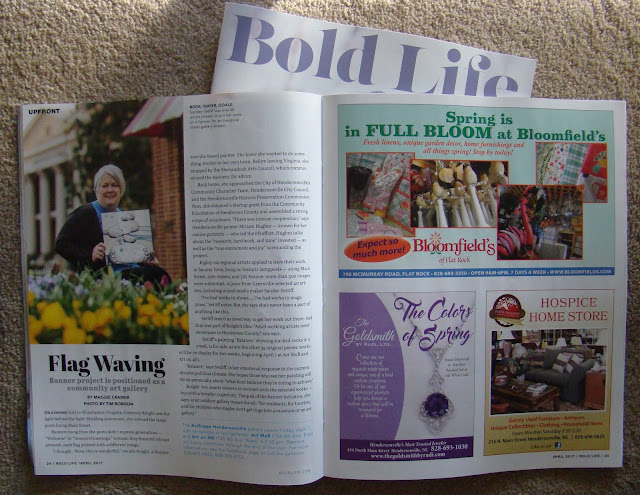 I'm really glad to be documenting this year with Seth Apter's #ARTifacts where we journal our art adventures whatever they may be :)
Artifacts for March can be found here.

My 10-year-old self would be thrilled to know that at the age of 58 I am making miniature pieces and that I am fairy gardening. After all, I use to love to play with my troll dolls and build them little forts out of twigs and paths of stone and hey, look at me now inner child, I'm still doing that.

Since I have 3 dwarfs I have decided to name them after the 3 stooges, it just seems to fit.

"Moe" is standing by the books ("Moe" is the active personality, and if not always dominant, always striving to be. Moe is the one who spurs the others into action. He devises plans to better their lot. ) reading to "Curly" the directions on how to properly lay a pebble path, who you can see is doing all the work. ("Curly" is as creative and active as Moe, but it is a spontaneous and joyous kind of creativity.) "Larry" is hunkered down by the mushrooms not wanting to do anything but to be left alone. (Larry" never initiates action. Were it not for the presence of his friends, Larry probably would live in peace, happy to roam the forest floor.) And last but not least is "Shemp" the snail ( very lovable )

Also known as:
Freudian Trio: Moe is the Superego, Larry's the Ego, and Curly's the Id
Nice Mean And In Between: Moe (Mean), Larry (In-Between) and Curly (Nice).

Want to find out which stooge you are? Go to this personality test.
I am a strong Moe with a secondary Curly as my personality. 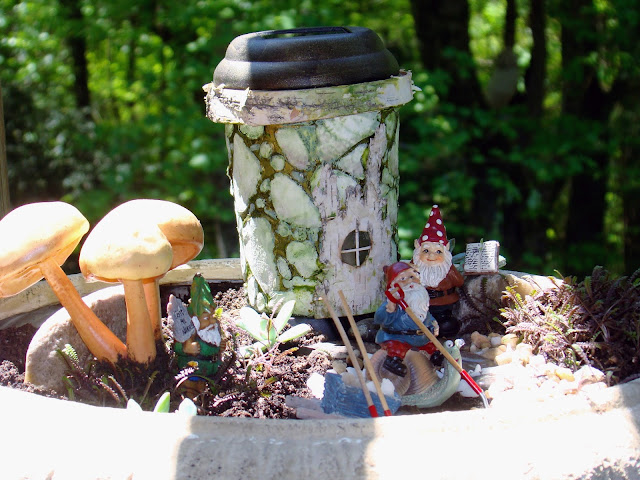 My latest addition as of 1pm this afternoon is a small stack of books perched on the rock. I made the books from Creative Paperclay and then stamped the open book with a small Prima script stamp. 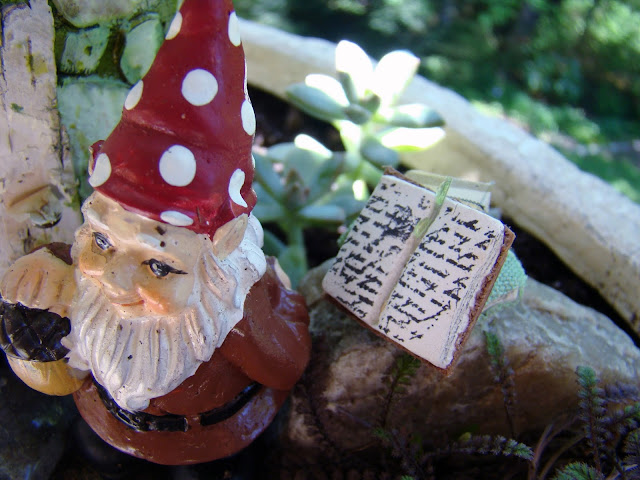 Each book is covered with some small scraps of material and one has a bookmark. 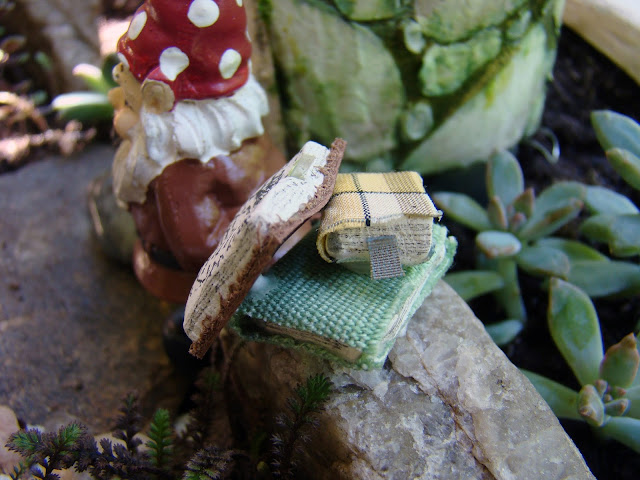 I am entering my little stack of books in:

Mixed Media Monthy Challenge #36 - Put a stamp on it 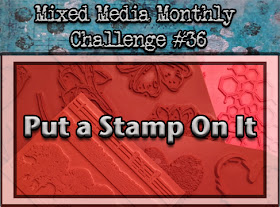 I admit, I have always resisted gnomes in the garden, and wondered why people were so intrigued by them.
Do you have garden gnomes?

I now have three wee gardens on my balcony...

The first garden was Petal's (the snail) garden, Buttercup the fairy loves to visit her friend there and they spend all day laying on the moss, staring into a mystical ball and telling tall tales about the future. 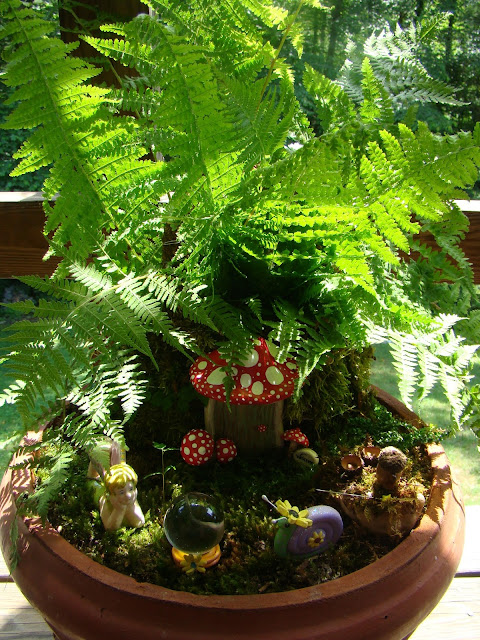 Next came Meadow's garden, my little fairy artist who loves to paint on her canvases and do art journaling...I think she is my "mini-me"...lol

I admit part of the appeal... for me anyway... about a fairy garden is making my own embellishments. I made the mushroom door, Petal herself and the crystal ball stand for Petal's garden.
Next came the gypsy style caravan for Meadow's garden plus a few other things that you can see in this video. ( Some things have been changed since last year but you'll get the general idea )
And now my latest is a "faux stone" gnome house, an idea I got from Pinterest for a fairy house powered by a solar light. I tweaked it a little...but you can check out how I made mine by visiting the ColourArte blog, and while you're there, sprinkle some fairy dust around for me so I know you visited...
please and thank you! 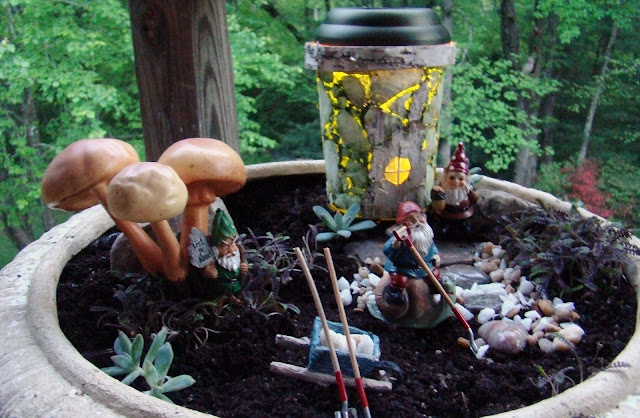 I guess the other part of the appeal is just a childhood fascination for all things miniature, probably Tinkerbell began that fantasy and well, there are some things we just don't outgrow, lol
Posted by SandeeNC at 12:18 AM 1 comment: