Knaidel
Knaidel means "dumpling," defined as "a small mass of leavened dough cooked by boiling or steaming." It is a German-derived Yiddish word.

Why: After finishing in third place two years in a row – eliminated both times by words of German origin – 13-year-old Arvind Mahankali spelled knaidel correctly to win the 2013 Scripps National Spelling Bee.


now for the controversy:
New York: The national spelling bee spelled it wrong.

Or so say mavens of Yiddish about the winning word, knaidel, in the widely televised Scripps National Spelling Bee on Thursday night. Knaidel is the matzo ball or dumpling that Jewish cooks put in chicken soup. 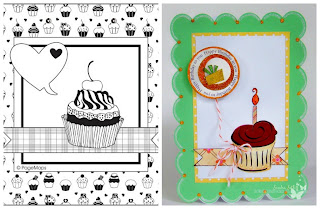 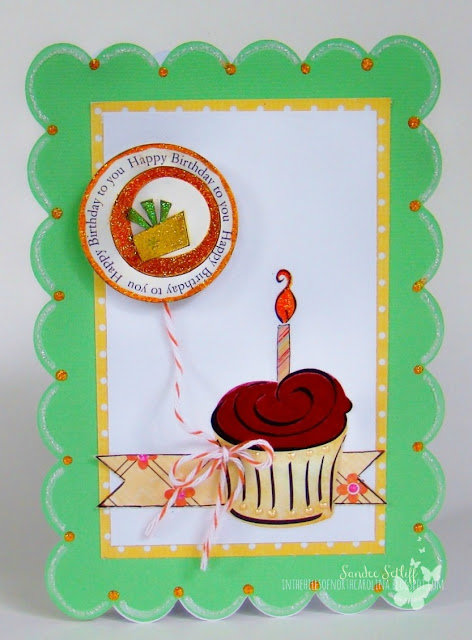 Since the cupcake was a rub on, I knew I could not do it over the banner and it not be smooth so I rubbed on the cupcake to the white background and then used my craft knife to cut alongside the cupcake and slid the banner underneath it. I added stickles to the sticker and popped it up to make it into a balloon. 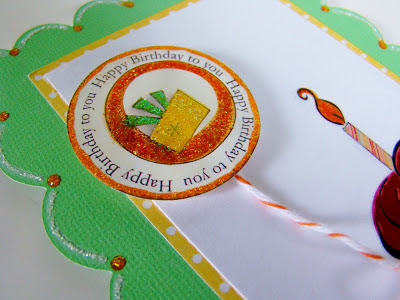 Cricut Craft Room - Basics
Ranger - stickles, Glossy Accents
Really Reasonable Ribbon - twine
all paper is miscellaneous, from my scrap pile, the cup cake rub is so old I lost the packaging to it
Posted by SandeeNC at 12:44 PM

Hi Sandee
what a fun card love how you have created the ballon and tide it to the cake. Great card
Ria

Super cute, love the shape. Thanks for playing along with us at DCD!

So cute Sandee! Love that cupcake!

Great card...love the way you tied it together.

Very nice! Love the cupcake. Thanks for entering DCD's shape challenge. Hope all is well, Sandee.

Such a fun/festive birthday card! I love that green color you used, it is such a pretty shade and the scallop edge is a great touch. The way you made the balloon is fab too!

So cute. Thanks for joining us at DCD for our Shaped Card challenge.
Anita
DT DCD
http://scrappyhappymommy.blogspot.ca

Very pretty card!! Great shape and great colors! Thanks for joining us at DCD this week!
Gerda
http://cardscreations.blogspot.com

Lots of interesting touches on this one. I like how you did the rub-on, it didn't look like a rub-on at all. Slitting the piece and sliding your banner underneath, was a great idea. As was tying on the sparkly balloon with the baker's twine. Really colorful card with lots of nifty details. TFS.

I saw that about knaidel on the news today. Cute card!!