The closest and largest full moon of 2012 comes tonight. Some will call it a supermoon.

The word supermoon didn’t come from astronomy. Instead, it came from astrology. Astrologer Richard Nolle of the website astropro.com takes credit for coining the term supermoon. In 1979, he defined it as: 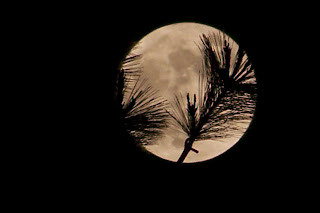 …a new or full moon which occurs with the moon at or near (within 90% of) its closest approach to Earth in a given orbit (perigee). In short, Earth, moon and sun are all in a line, with moon in its nearest approach to Earth.
Full moon names by month:
January: Old Moon, or Moon After Yule
February: Snow Moon, Hunger Moon, or Wolf Moon
March: Sap Moon, Crow Moon, or Lenten Moon
April: Grass Moon, or Egg Moon
May: Planting Moon, or Milk Moon
June: Rose Moon, Flower Moon, or Strawberry Moon
July: Thunder Moon, or Hay Moon
August: Green Corn Moon, or Grain Moon
September: Fruit Moon, or Harvest Moon
October: Harvest Moon, or Hunter’s Moon
November: Hunter’s Moon, Frosty Moon, or Beaver Moon
December: Moon Before Yule, or Long Night Moon

There are 4-6 supermoons a year on average.

That doesn’t sound very special, does it? In fact, tonight’s full moon lines up much more closely with perigee – the moon’s closest point to Earth – than Nolle’s original definition. The 2012 May full moon falls some six minutes after perigee, the moon’s closest point to Earth for this month. At perigee, the moon lies only 356,955 kilometers (221,802 miles) away. Later this month, on May 19, the moon will swing out to apogee – its farthest point for the month – at 406,448 kilometers (252,555 miles) distant. So you can see tonight’s moon really is at its closest.

All on tripod with timer settings :)
Posted by SandeeNC at 12:24 AM

...wow what super piccy's, who needs the tv when we have the universe outside our door...Mel :)

I tried to get a photo of the moon last night, but of course I have no way to control my shutter speed. You did a super job. I am very impressed.

BTW, I have NO idea where I have been for two days, except I know I have been busy and gone so didn't stop by to visit. So, so sorry.

WOW...Sandee What fabulous pics, your account is so interesting! lovely post.. thanks for sharing! Hugs May x x x

An amazing and very interesting post Sandee and love your brilliant photos. Alas, the moon was covered in heavy cloud last night so there was not sight of the moon in this part of the UK. Anne x

Once again, you wow me with your photos. And thanks for the info--didn't know that supermoons occur 4-6 times a year. TFS.--Pat

Wow, beautiful photos! Thanks for sharing them since I didn't get to see it!

Hi Sandee,
Lovely shots of the moon. I used to do lots of this kind of photography with film. Must look through some old negs.
BTW that spider has left and set up home somewhere else. I left the lid up for a day - no good without a roof!
See you later today,
Ros.