Next, I looked through my Atlas for the Mermaid, thinking to piece together different maps to create her, but stopped short of that idea when I saw Mexico. Seriously, it looks like the bottom half of a mermaid. This isn't the one I used, this one is from Google, but I am hoping you can see it too.

Can you see her shape? She's a "bonita" Mexican mermaid...I wish my map didn't cut off the bottom of her would be tail, but I like the organic shape. 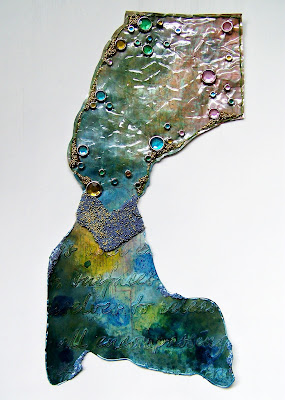 I cut along the edges of Mexico, and then used a word stencil and modeling paste over the tail part. I used my Gelatos to color her in, and also added alcohol inks and Twinkling H20's. I just smushed the colors around until I was reasonably happy with it. 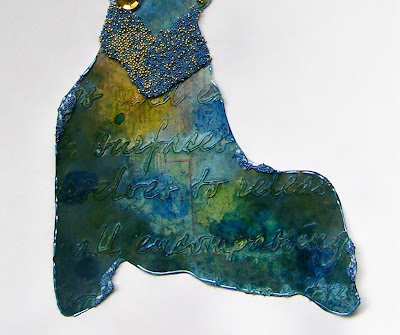 I added a wrinkled piece of plastic to the top portion of her body by sewing it in place and added Bedazzle It Beads ( yeah, I have one of those, lol ) to her body followed by a boatload of beads and micro beads along with Ranger's stickles and Liquid Pearls. Letting it dry is the tortuous part! Here she is, still wet, but I wanted you to see how I progressed with her. 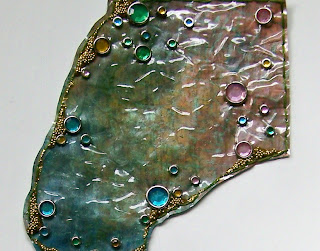 Then my sentiment was added, the hanging touches, and I am done..:) I am entering this into:
PanPastel UK Challenge Blog - #35 By the Sea
Faber-Castell, Mou Saha's color challenge 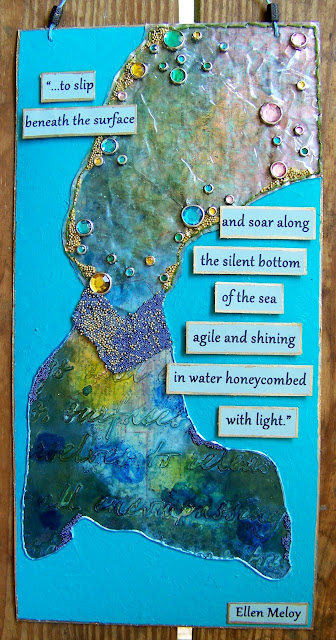 This really caught my eye Sandee! I love the jewel like colours and the texture you've created with the little gems and micro beads (?). I get the mermaid idea too - great sentiment.
Juliaxx

Hi there Sandee love the colours in this work and yes can see the tail of the mermaid too and lovely desk down below..
Thanks so much for popping over and thanks for sharing ~ happy WOYWW! Shaz in Oz. x #25

What a clever eye you have to spot the mermaid tail in Mexico.
Bonita is right!!!

Hi Sandee, yes I can see the mermaid shape and I love how you have recreated it. Lots of people talk about Gelatos but I have not seen them here, they certainly have wonderful colours in them and I love the addition of the jewels - very nice touch. Crafty hugs, Anne x

This is awesome! I love how you used the map to make her tail!!

What rich colors with some sparkle and a perfect saying to match. Wow! :)

I am totally speechless she is beautiful really she is. I laughed when you said look at Mexico. We I was a young child (yesterday) I was taught to look in the clouds and the trees for pictures as we were travelling. Well you took me for a drive today and yep Mexico has it's own Mermaid. I love the colours and the beads on her, she is beautiful.

Well done you should win that challenge hands down.

It's almost like I made a wish and clapped my hands, then with the click of my mouse your mermaid project was up! lol :) Or more like I'm still lost in time...I just read your WOYWW post and forgot today wasn't Wednesday, much like I forgot yesterday was Wednesday, so I thought I would have to wait a whole 'nother day to see your mermaid, but I didn't. Ah, see...there is an upside to completely losing all track of time! It's lovely, by the way. I don't quite see the mermaid because I can't figure out exactly what part of her you said is missing but still the colors and details are lovely. All that fabulous texture and sparkle and the micro beads are so yum! Is that part her tail? Maybe I'm starting to see it... :) Its really great and I hope you win the challenge! ~Deeyll

Really beautiful, I love the colours and the shimmer. Thank you for joining in with the PanPastel challenge blog
Lindsay xx

This is unbelievable. I never saw Mexico that way before. When I first saw the plastic, I thought it was UTEE. It looked it in the photo. Glad I'm willing to read. Very impressive piece.

wow Sandee this is so gorgeous. The colors and movement are amazing. Congratulations on the win!