Until making this discovery I had no idea what I was going to do do for the Tim Holtz September tag as I didn't have anything that he used, and I felt quite stumped for ideas, but as soon as I saw the watercolor tin, an idea leapt inside my tiny brain....scary, huh? 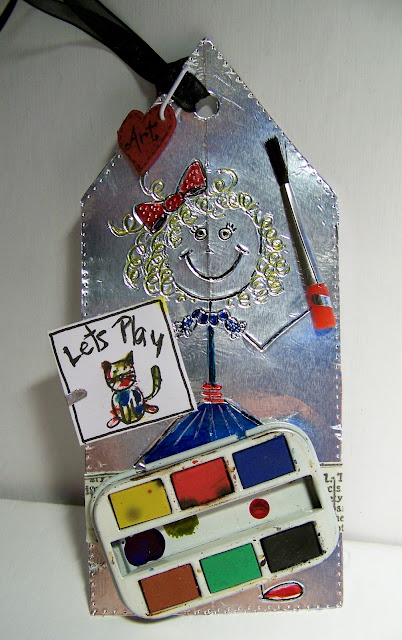 The splotches of paint in the tray are the alcohol inks I used to color her in with, I thought it would be cute if it looked as if she had just finished playing with her watercolors.

I took notice of Tim's "* the details" and drew a child's version of a kitty, messily colored in to tie in with the watercolors, and even the girl herself is a stick figure drawing much like I use to draw as a kid, then further enhanced the theme with the red heart with art...as in "art in my heart". 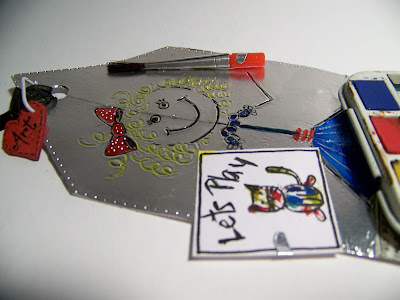 I used a quilters wheel for the outside edge of the tag, the pen technique for the eyes, the paper piercer for the the dots, and an embossing tool to draw the girl. 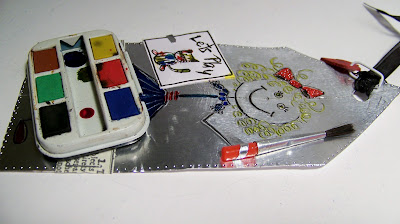 This is so very awesome! Brilliant idea, Love it! :0)

Wow Sandee, talk about being innovative! Brilliant idea and lovely to put the little paint tin on too, I love it. Crafty hugs, Anne x

OMGosh, that is SO COOL!!! I love that you improvised and came up with such a wonderful and FUN tag! The tiny watercolor tin is just adorable!!!

How clever and cute!! I like all the detail touches. :)

That is so cute, what a happy find! Barb

I love how you used the paint tin on the tag!! it all looks so fantastic! Great Job!

Mrs Quirky at her best, love it Sandee, just the type of girl to take an apple for the teacher eh? BJ

I thought this was a very cute tag. And far more original than most of those who made theirs exactly like Tim's.

I thought you were using the HVAC tape. I bought a roll of that sticky-backed HVAC tape about 5 years ago, and have barely put a dent in it (no pun intended).

This is awesome! I just love it, especially the little details, like the art heart and the child like drawing!

A totally unexpected and totally fun take on the tim tag for September. Very clever!