I thought I would be more nervous about drawing the male cock than I ended up being, actually had a harder time capturing the curves of the thighs and the muscles in the shoulders and chest....yes, I suffered greatly today for my art.

I chose to bring my Tombow markers and I think I was slighted by the artist sitting next to me who asked if she could show my markers to the artist on the other side of her and said...."Are these made to be used in the adult coloring books?" I told I guess you could but that I've never used one...her answer "Me either, I don't have the time for that." hmmm....bit my tongue and returned to my own little world.

So first off, the 3 minute poses, I decided to put them all on one page in order to spare my paper usage, after all, they are just practice....well, actually the whole session is practice, but you know what I mean. He was a very good model, came with all his own props and supplied us with "classic" poses. 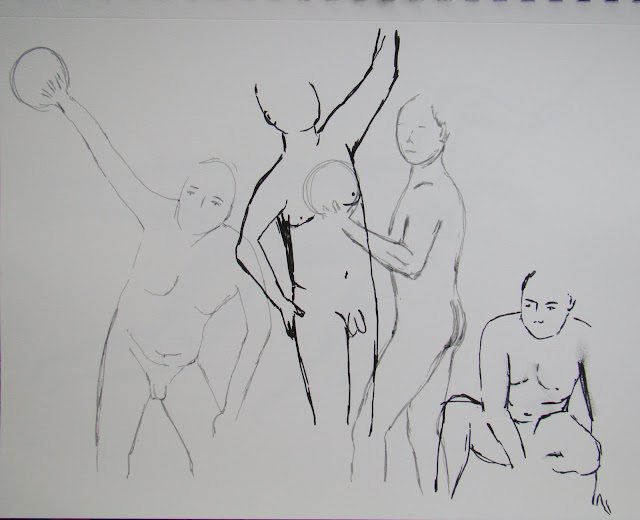 Next up were the 10 minute poses, I think these are more frustrating because it's more than a quick sketch but not enough time to fix mistakes or get the details. I was also a little more than frustrated with my choice of the markers, and was having some difficulty being fluid. I was very stiff and uncomfortable, I think that ladies remark was still bouncing around in my head. 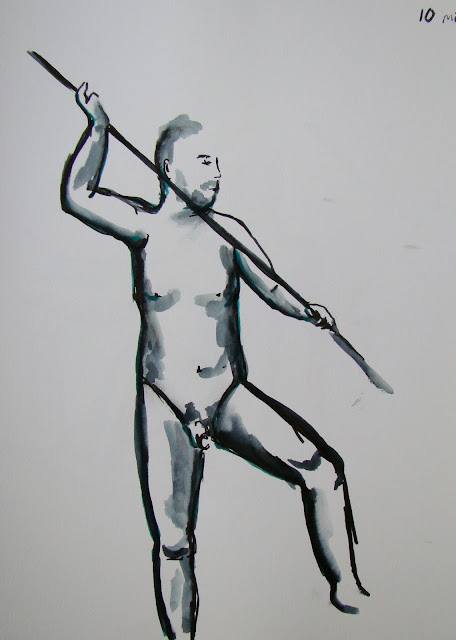 This pose was extremely difficult, and I just couldn't grasp the foreshortening in a 10 minute pose. 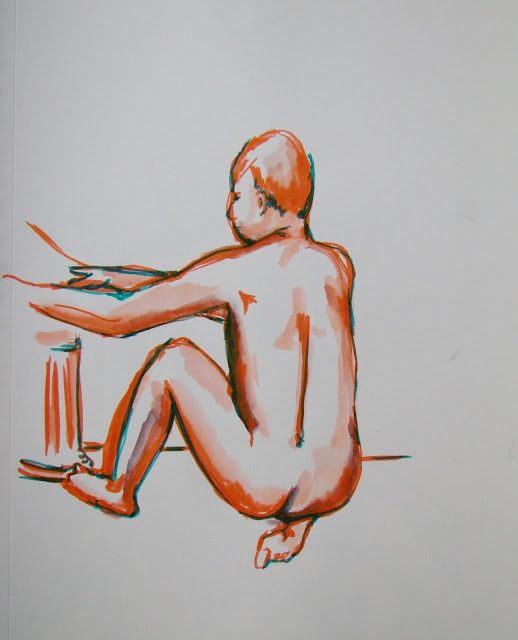 Next, we had a 30 minute pose, I love the longer poses, but I also tried something different. I tried Contour drawing technique and really liked how it turned out.
A contour is the line which defines a form or edge - an outline. Contour drawing is the place where most beginners start, following the visible edges of a shape. The contour describes the outermost edges of a form, as well as dramatic changes of plane within the form. 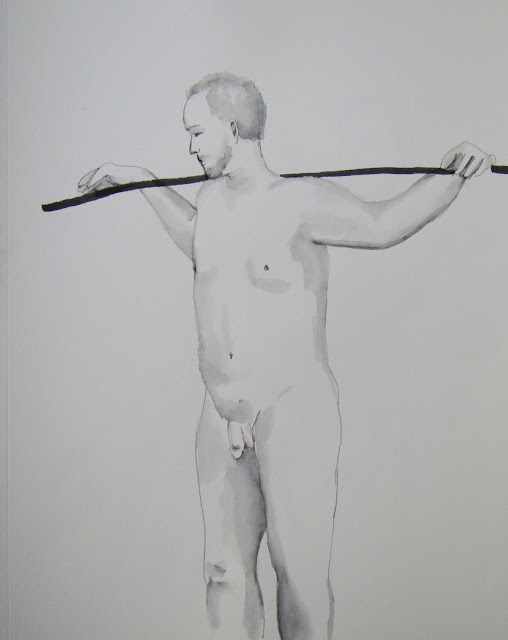 Honestly, I would have been happy to have been finished after that drawing because I really, really liked how it came out. but we had time for another 20 minute pose. I tried the contour drawing again but it wasn't as successful as the first one. But by using the Tombow in a watercolor format seem to work pretty well over all and I felt more comfortable using them. 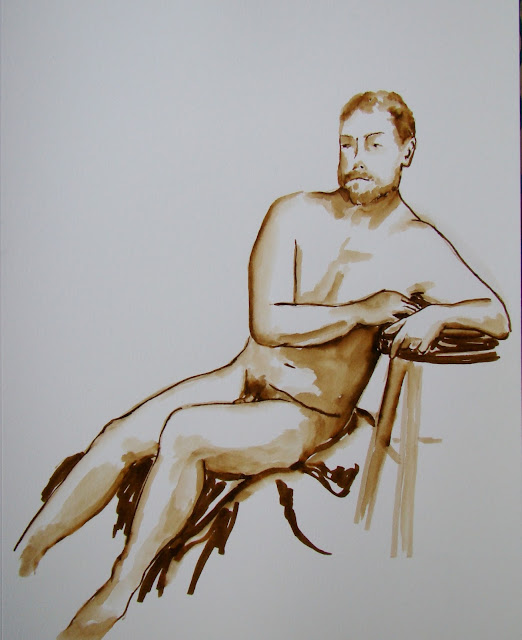 I also will admit that it un-nerved me a little bit that he came over to me after the session to see what I had drawn. I was the only one too....I was more nervous showing him my version of his nude body which was silly considering he just posed nude for 2 hours but I've read that the men are always curious to see if women draw their male bits or if they gloss over that area. I think since I was the youngest in the group he came over to see what I had done. .....there was a lady who sat next to me on the other side who did just draw his face and "glossed" over the male bits and she requested a female model next time. All I could think of was...really?

He was actually a little "impressed sounding" ( or could that have been my imagination?) that I did watercolor sketching...I think I smiled all the way home.
Posted by SandeeNC at 1:28 PM

All the sketches were awesome.. you did seem a lil less familiar with this image.. I think your last was your most comfortable one.. (cus his winky was no longer OUT in the OPEN) but I woulda been a little les confident do the male body too i think...

totally impressed with you stepping out to do these!!

Excellent my friend!! I think I would have been a tad nervous painting a nude body, male or female! You did great!
Hugs,
Yvonne

I think you did an amazing job!

Lord, I would probably be giggling like a school girl! How did you keep you a dignified composure? I probably would have glossed over the male bits like that lady did. You sure do have some "bits" ( I thought I better not put the other word).
Pam
scrap-n-sewgranny.blogspot.com

Wonderful and I love the last two. Course, you know I already admire your work and how you are so willing to delve into differing art genre. Is this a community class offering?

lol, giggling while reading your response, you are too funny! If you ever want to join me in calss, it's held on Tuesday morning 10-12...just saying!

Yes, it's available to everyone, once a week, I am loving it! ( The last 2 are the only ones I like too )

These are excellent for not having done this type of thing before this workshop. I think the last one done in the watercolor style is the best as it gives some contour and shadowing and gives some depth to the sketch. Kudos to you for trying something new!

My favorite is still the one in grey and it's a watercolor also, but doesn't it look like pencil? I think I am fascinated by that, lol

It's near impossible for me to get a Tuesday off now, but I really want to make it over for some of these workshops.

I hope you can, I am loving them!

They are wonderful, I wish we had the opportunity to do something like this where I live.

I can really appreciate the stress! I've had some crazy life drawing times myself. One male model lost control and his staff ended up fully vertical! The teacher had to ask him to retire from the stand. A female model, a french young thing with very perky breasts, fainted. A whole crew of UTn football players, who had only signed up for the class to see skin and get what they thought would be an easy "A" reached out en masse to catch her. But at the last second, they thought, nooooo we can't touch her she is nekked! So she fell on her face and broke out all her teeth! Another female model's time of the month came while she posed, and she had to flee for the bathroom. But, once you get used to the ins and outs, there's no better way to improve your drawing! Thanks for sharing!