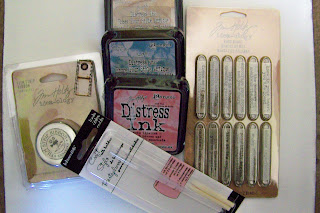 and I made his June tag, which coincided with what's going on in my life currently.
Let me explain:
Tomorrow I am driving down to South Carolina to finally bury my dad. I say finally because he actually passed away last August. He was cremated and his memorial is being held on Sunday. ( Don't even ask me for the details on why so late, loooooooooooong story. )

But I have been reminiscing all week about him and 2 weeks ago my cousin posted a picture taken of me and my dad back in 1967, so this June tag was perfect timing. I think because it meant so much to me that I had a really hard time making the tag. I printed the picture 6 times in all, ( the fifth time, things went flying across my craft desk, can we say bad temper? ) so the 6th time I decided to not try and color the picture itself and left it as is.

I did try and follow his other steps though.
And yes, since it was taken at Christmas I did add some red to it. I have an entire collection of old newspapers and magazines in a hope chest from my mom, and there was a magazine from the year 1967! Bonus! Since it had a damaged front cover, ( like as in none ), I didn't feel too bad cutting an article from it to use. I found this old airline ad where they talked about serving steak, baked potatoes etc. ( like wow, you really use to get such good service, not like nowadays, lol ) and since my dad was notorious for eating that meal every night, it just seemed fitting! 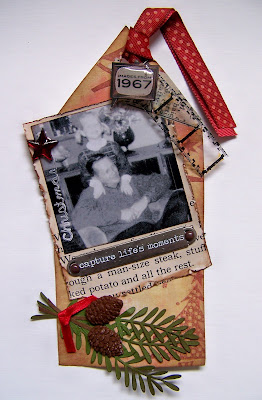 I also found this little TV with the year 1967, and just had to cut it out, and added some glossy accents to the screen part, isn't it cute? 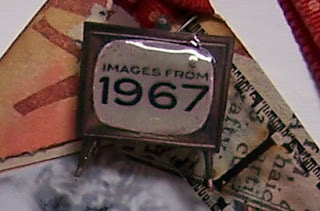 Project Pinterest
Begins on the 10th of every month, so join the party by linking up what you created from a pin that inspired you!
:)
Posted by SandeeNC at 12:00 AM

Email ThisBlogThis!Share to TwitterShare to FacebookShare to Pinterest
Labels: 12 Tags of 2012

What a great tag, the red accents really make it pop! I love the cute little t.v! Thanks for stopping by my blog :-)

What a lovely tribute to your Dad.

Thank you for waving at me from across the pond lol.

We don't know if the mans dog was ever found. We offered to look after it for the family if it could be found untill they were ready to come get it but we didn't get the call.

What a fabulous take on Sir Timmie's tag... just brillant, fab pic of your Dad! love the little TV, Love the way you have used the red for christmas.. Simply Perfect.. Hugs May x x x

...awe Sandee big hug for ((you)) such a heartfelt posting...your Tag is just loVely & a wonderful tribute to your Dad, it's a super take on Tim's (which I think is the hardest so far) loVe all your elements & the cute TV...& your stash of Holtz is ever growing, all fabby stuff...Mel :)

Fab! I keep reading about this shop called Michaels over there, I love the sound of this place, you all buy such gorgeous stuff there! Zo xx

Hi Sandee. What a nice tag. I'll be thinking of you. You keep reminiscing, it's great therapy.

That looks like the perfect tag to represent your father--in all the details. Beautiful.

I hope you have decent weather tomorrow. Sorry to hear about your dad's passing.

Hi Sandee, it made me feel so sad to read today's post but it is a wonderful tribute to your Dad, the timing could not have been better. Your tag is gorgeous, I love it, love it, love it!

Now, guess what? You actually have a piece of TH stash that I don't have yet! Hooray for you...since it was all my fault that you started. The pen and nibs - but I have got them order so it won't take me long to catch up!

Hope all goes well for you this weekend, my lovely friend.

What an amazing tribute to your father. Every single element in your card has meaning. Blessings!

Perfect tribute Sandee, strange thing is I did a tribute to my Aunty Jean who has also passed away. And would you know my friend is also scattering the ashes, this very weekend, of her father who died years ago too. It is the anniversary of my own Dad's passing on 18th - can't believe it is 14years since and it still hurts. BJ

Color me impressed. Yep, that TV is the BEST!! Such a great embellishment from an old ad. Also, I've wanted some of that strip ribbon since I first saw it a couple of years ago during the Christmas tags marathon.

I hope your day goes well.

I like the sentimental value in the story behind the tag. I'm glad you went ahead and made the tag without the colour - it was meant to be. I like your clever little embellishment with the TV - very creative!.