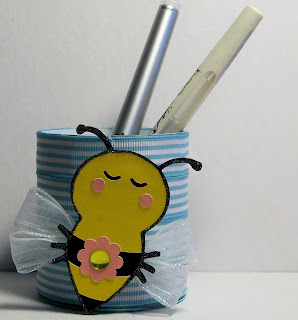 A little mini tutorial on the wings, they were very easy to create. First I started with the base of the bee's body. You can see in the picture below, the white wings as you would have cut them out from the Cricut. At this point the body is not attached to the wings, just laying on top so you can see what it would look like if you made it "straight" Cricut. 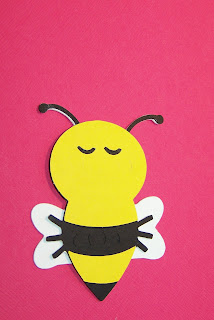 So I clipped his wings so to speak, leaving the "square" shape that fits his body, and placed a pop dot in the middle of that. Next, took some see through mesh ribbon ( this ribbon has an iridescent quality about it, perfect for wings! ), looped it over and sewed it closed. make 4 of the loops. 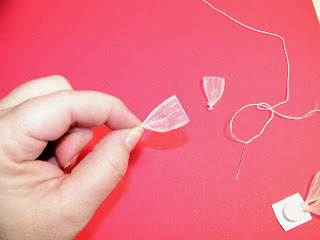 Then adhere all 4 loops to the square: 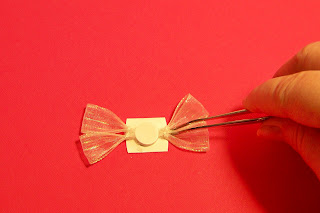 
Starting in late 2006, commercial migratory beekeepers along the East Coast of the United States
began reporting sharp declines in their honey bee colonies. Because of the severity and unusual
circumstances of these colony declines, scientists named this phenomenon colony collapse.

Honey bees are the most economically valuable pollinators of agricultural crops worldwide.
Scientists at universities and the U.S. Department of Agriculture (USDA) frequently assert that
bee pollination is involved in about one-third of the U.S. diet, and contributes to the production of
a wide range of fruits, vegetables, tree nuts, forage crops, some field crops, and other specialty
crops.
Posted by SandeeNC at 12:00 AM

Awesome can! I've got some chevron ribbon that would look awesome!

oh that is so cute and great tutorial!! i love that little bee

The pen cup is adorable! I love the tutorial also!

Love the bees wings! That is such a great idea and like you said, adds more dimension. I promise not to kill the honey bees (or the mice eating king snakes!). We had some in our cinderblock wall-the house wall not a fence. The landlord call a bee person and they sealed the hole shut. Sure that kept more bees from going in, but what about the ones in there? Like the queen?! And what about the honey???! Well, I guess it is just rotting in the wall of our house. A couple bees somehow found their way into the house but I guess most of them died.

Love the pencil holder and really love the new wings, very delicate just like real bees! Bees are sadly on the decline here in the UK, mainly because they are losing their natural habitats and intensive farming - very sad.

Super cute idea, great job! Thank you for joining us at FCCB this week!
http://scrapqueen141.blogspot.com/

That is such a great little project!LOVE the bee,Thank you for joining us over at FCCB this week!:)

hey there thanks for becoming a follower.. I do have lots of Peggy-isms LOL (ink booger) I love your site good luck on the Circuit thing I LOVE my Cricut and use it nearly everyday in some way. I've been teaching Cricut classes for 2 years to ladies who bought them and couldn't figure them out. I've added lots of ladies to my friend list doing this have a great day! Peggy C

Oh my...love your twist of ribbon for the bee's wings...very clever! Not to mention, adorable! What a fun way to store your crafting tools...love it! Thanks for joining us at FCCB this week!