"1942- Effie Musser began making potato chips as a means of creating additional income for her family. Her husband, Si, was a farmer. Effie took her chips to Central market, Lancaster, PA on Tuesday and Friday mornings to sell at stall 151.


A snack distributor in Baltimore, MD heard about Effie’s good tasting chips and contracted with her to supply bulk chips delivered to him. He repacked the bulk chips into his branded tin can, Charles Chips, named after Charles St, Baltimore, MD. He had financial issues and since Effie was his largest creditor and he chose to sell his assets to her rather than go bankrupt. At this point, the potato chip business was generating more revenue than the farm was, so Si joined Effie in the business and hired a tenant farmer to do the farm chores.

By 1946, production had grown from their small residential kitchen to a 50 foot by 250 foot cement block building. At the time, Si and Effie were producing private label potato chips for Fritos and A&P while building the home delivery concept with Charles Chips. In the late 50’s Si and Effie expanded the Charles Chips brand to include Charles Pretzels and Charles Cookies and in the years ahead developed a Christmas Holiday Gift program. In 1962, a new plant was built in Calhoun, KY to service the mid-west and south." 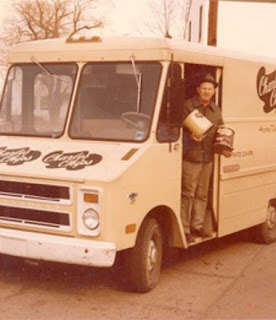 Above is a picture of the trucks that delivered the chips and cookies right up to your door. Each man, like the one pictured, owned his own truck, established his own delivery route. My dad is the one they purchased their chips from, and in turn my dad purchased the chips from Musser. This was such a novelty as chips had only been sold in bags. Back then, this was a whole new concept! I use to love these trucks! The good ole' days! I was quite a potato chip snob too, which cost me my modeling career as I turned down a job with Lays. I was only 15 at the time, but once you turn down a job, well, you no longer had a job! But I was OK with that, even though I loved being in ads and the occasional commercial.

I'm always on the look out for any Charles Chip product as my dad owned several franchises in the south. Ah, the memories of chips, cookies, etc. in the pantry. The cans were always special and there are people today who still covet their CC cans! So when on Pinterest I ran across this bird house, my mouth dropped open!
I think maybe its a bank? I know the cans were round so really not sure what they have used, but the Charles Chip logo is undeniable! I am always discovering new merchandise that they "gave away" as promos back then. My dad didn't keep any of it! The horrors of it! No one would ever accuse my dad of being a hoarder for sure!
And this project made me think of the few tins I had found years ago when I first discovered Ebay. ( A place I am afraid to go back to cause it's very addicting, but I really enjoyed finding the Charles Chip items that brought back so many delightful childhood memories!! ) Now I have had these tins for years, and they aren't in pristine shape so I wanted to find a use for them that I would see and appreciate every day.

Which made me think of my favorite place, the balcony, so I took a chip can and a pretzel can and stacked them together, using some cork board in between the 2 layers for stability and now use it as a plant stand. It's not the biggest project out there in Pinterest land, but it is making use of something I collect instead of it collecting dust.
Plus it makes me smile when I look at them.
a view of my corner of the balcony: 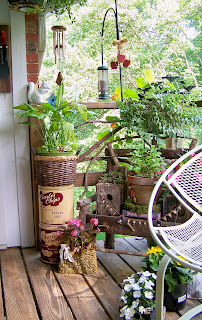 and a close up of the cans: 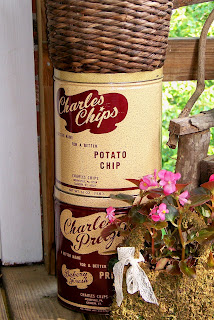 Here are some other memorabilia I have collected over the years: 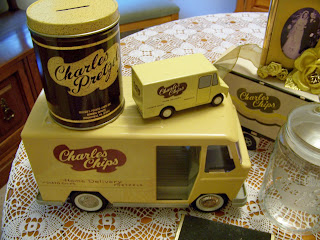 The large truck is from my childhood. Dad gave one to me and one to my older brother. His is kinda, well loved aka as trashed, but then he played with his as a boy where mine was forgotten until I found it after my mom died in 1999, which is when the obsession to collect Charles Chip stuff came about. 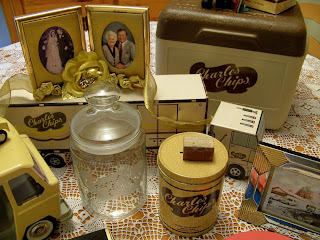 The photograph is something I made for the party table for my mom and dad's 50th wedding anniversary. The photo on the left taken at their wedding and then the latest "church" photo on the right. 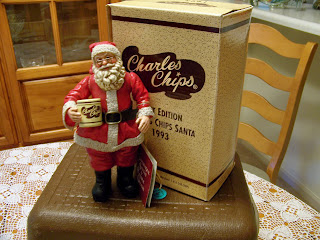 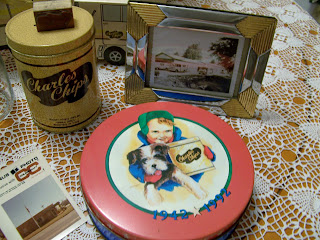 You can't tell, but these 2 photos were pictures of my dad's bussiness and warehouses back when he first started out. And below, in the black velvet box is a deck of playing cards that I use to LOVE when I was a kid. The matches were kind of a joke gift one year for my dad, we all had CB's back then and his handle was landlord, mine was daddy's girl ;) Are you old enough to remember this fad?

"The 1970s saw an explosion in the use of CB radio. The radio equipment technology had become smaller and gained in popularity among truckers. Since the national speed limit had been lowered to 55 mph (90 kph), truckers began to use CB radios to alert each other when they saw speed traps set up by the police.
CB radio popularity also took off in the 1970s thanks to films such as Convoy and the Smokey and the Bandit series. Television shows such as The Dukes of Hazzard also helped the device gain popularity. These films and television shows depicted truckers and good ole boys outrunning the law with the help of their CB radios." 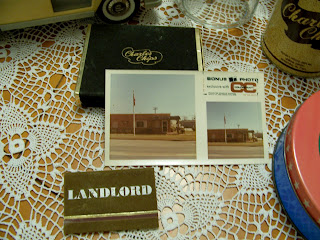 Now I have to figure out a way to display all my goodies again now that I am in a new place. Thanks for indulging me in my trip down memory lane, this was something I didn't get to do when he died.

Hi Sandee...TFS your terrific stoy. Such a walk down memory lane, and I don't remember if I've heard of Charlie Chips. But guess what?! I was born in Baltimore. That's pretty neat to learn of that little snippet of history.

Hi Sandee, a lovely post today and a great trip down memory lane for you. Thinking of you today. Hugs, Anne x

Let's hope this is a memorable day with many happy memories like this post. I really enjoyed reading about Charles Chips. Of course, I confess I'd never heard of them until now.

It sounds like you had a very interesting life growing up. And indulgence is what blogging is all about.

What a neat post! I'm so sorry to hear about the loss of your father.
:(

How awesome! Love every little detail in this post.
Aaaand I'm the first person to link up! :D
I'm so excited about this. No, like, REALLY excited! lol
Thank you for hostingg Sandee.

Thanks for sharing the bit of history as well as your collection!

Wow! You were a model and in commercials! Cool!

I remember CBs. My dad was really into it. I hardly ever talked on there but my dad wanted me to have a handle so I was Lady Blue.

All those old tins and old pictures are really sweet! :)

Oh my goodness! I loved those chips. My Aunt and Uncle had them at their house and I loved those darn cans...you brought me right back to my childhood.

Also I am sorry to hear about your Dad. But the memories and special shares like this are like healing salve, yes?

I remember Charles Chips (loved them) and actually saw the first photo on pinterest! Thought of you.

Just talking about Charles Chips the other day! They're still in business, too! They even have chocolate chip cookies - which I didn't remember. Now that I found they're still around I can't stop thinking about them and may have to order to stop this craving. I like the pictures of your old tins & the square 'bird house' is great! Happy hunting!

Enjoyed your post on CC Memorabilia! Would like to communicate with you via my Email KC227RN@YAHOO.COM. We are fellow collectors & would like to learn more. Looking forward to hearing from or other collectors!

I discovered a Musser's Potato Chips can in my basement that my parents had in their house. I think it dates to the 50s but I am not sure. I see from other websites, that Musser's Potato Chips were the predecessors to Charles Chips. I would be interested in knowing if there is any value in my old potato chip can.

Dennis
I was at an antique store today and came across a Musser Chip can. I am curious what your can looks like. Mine is a 3 pound can which is white background with a red border top and bottom and a young girl picture. On the bottom red border it is printed S. T. Musser, Mountville, Lanc. Co., PA
Thanks
Cmusner@windstream.net