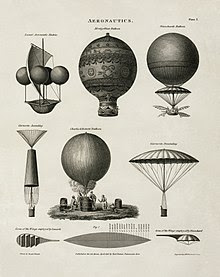 "Interestingly, the history of hot air ballooning can be traced back to the 18th century - way before the Wright Brothers developed the first airplane.
The urge to fly like the birds prompted humans undertake several attempts to soar in the skies.


The Montgolfier brothers - Joseph-Michel Montgolfier and Jacques-Etienne Montgolfier, are given the credit of being the hot air balloon inventors - a feat they achieved in the second half of the 18th century."
I don't now about you, but I am fascinated with hot air balloons...don't get me wrong, I do not, in any way, want to be in one, I just like looking at them from the ground floating across the sky.

and why am I talking about hot air balloons, you ask?
Because it's time for

where our challenge is Inventions, inventors, or steampunk
Our very generous sponsor is:

http://www.genuinelyjanestudios.com/blog.html
Where you have the chance to win a $25 Gift certificate !!

I was really going back and forth on this challenge because there are SO many awesome things that have been invented over time, but in the end inspiration from this picture  I discovered on Pinterest won out. I was smitten from the moment I saw it! 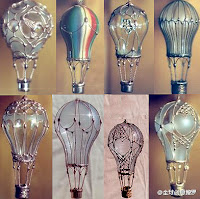 So many elements were found recycled parts, the balloon ( or envelope ) itself came from packaging, covered it in tissue paper, outlined with my Pebeo to create the seams, colored with metallic melon gelato, and embellished with rhinestones and pearls. 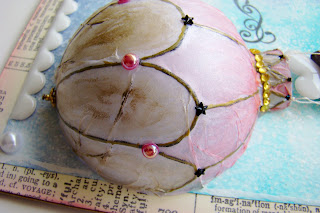 The basket ( or gondola ) was created from a used tea light, that tin is so malleable, I just loved working with it. Covered it with tissue tape which was then washed with the same gelato color as the balloon. After I punched holes into the basket I sewed it with silk cording to attach it to the balloon. I used LSD to prop up the puffy heart that is riding in the basket. 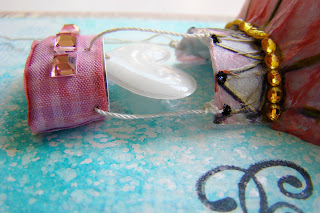 I love the free hanging heart bead on the ground cable....which really shouldn't be attached theoretically beacause in the real world it would get caught on a tree or something...but then hey, there aren't giant puffy hearts flying balloons either... but I like how it looks :) 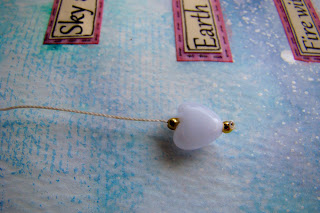 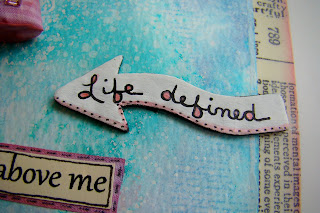 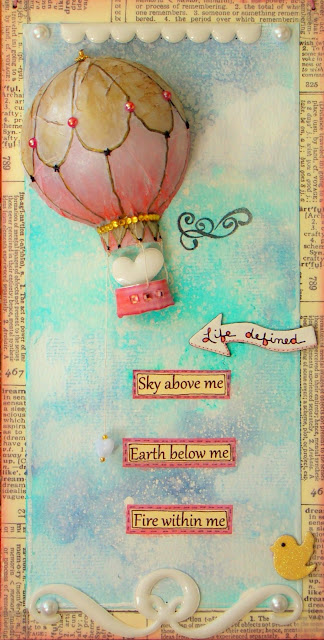 Looks great...I love the entiment...it speaks to me!

A stunning creation Sandee, love how you made the hot air balloon and the gorgeous colours of the whole piece. I don't like heights too much but went up in a balloon a few years ago and it is the most magical feeling, it is not scary at all, you just feel as though you are floating - you should definitely try it! Hugs, Anne x

This is stunning Sandee, I love every element of it and the way you have put it together with the materials you have used, makes a truly beautiful hanger, Carole Z X

Wow, love this! I have so many Christmas balls that this would be great on. Love your take on the challenge.
Hugz, Z

This is great! Maybe you should come out for the Albuquerque Balloon Fiesta? You'd see hundreds of balloons from all over the world.

Wonderful piece of art. Looks fantastic. I love the colours and the detailing.

Love your take on our inventions challenge, Sandee!

Your balloon is awesome and the cute touch spreads a lot of happiness!

Excellent!
I'm with you. They fascinate me, but I don't think I could ever be inside of one. Too afraid of heights! This does strike me as much less scary than handgliding, though. Moves much slower. ;)

How inventive and beautiful !

Wow, love the balloon, it is a fantastic hanging.
Yvonne x

I just love this wall hanging!!! How did you use an envelope to create that balloon??? I'm trying to figure it out but my vintage brain wants to sleep instead...

My name is Cindy said...

Awesome!! How did you getthe shape of the balloon? Cindy x

WOW! This is so cool!

Love the way the hot air balloon turned out.

wow! this is amazing - gorgeous colors and the balloon is just fabulous. The addition of the hearts and birdie is perfect!

Love this project Sandee - the air balloon is gorgeous! I saw the light bulb balloons too and thought they were cool! xx

Hi Sandee,
What a fabulous hanging. Loved reading how you made it, so many details.
Avril xx

Amazing!! I live in Bristol where we have the international balloon fiesta so get to see balloons over my house a lot especially when the fiesta is on and they are amazing!

Thanks for joining the sparkles girls over at sparkles monthly challenges with our Hearts theme.

Thankyou for joining us at Sparkles Monthly Challenges for our "Hearts" challenge - hope to see you again soon and good luck in the draw.

Great project. Thank you for sharing at Sparkles