This concerns the longest word in the dictionary:

OK, so you need to watch this short video, for several reasons, one being the ability of the assistant editor of Merriam-Webster to pronounce words like  "antidisestablishmentarianism" with ease that impressed me and to find out the criteria for picking words that go into the dictionary. I do think her job is somewhat sublime, although I still root for supercalifragilisticexpialidocious to be in their dictionary, and evidently so do lots of other people after reviewing their comments concerning the video.

Now what does supercalifragilisticexpialidocious actually mean?
We need to know this so we can use it more often, correct?
"We all know the origin of the word; a song from the 1964 Disney musical film Mary Poppins. The song was written by the Sherman Brothers, and sung by Julie Andrews and Dick Van Dyke.
The roots of the word have been defined as follows: super- "above", cali- "beauty", fragilistic- "delicate", expiali- "to atone", and docious- "educable", with the sum of these parts signifying roughly "Atoning for educability through delicate beauty
According to the film, it is defined as "something to say when you have nothing to say"."

There are more things I wanted to add..subliminally perhaps, like the paint brushes for being creative, or the books because I am a librocubicularist ( a person who reads in bed, lol )... 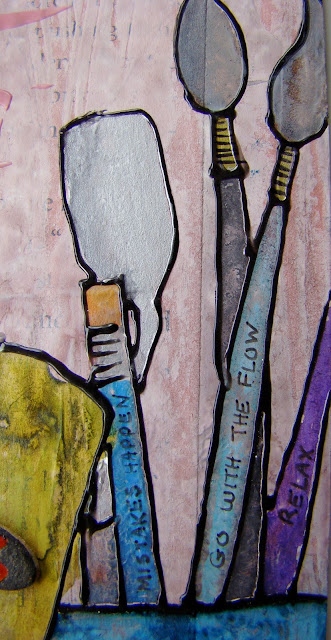 I also have a new toy, it's Pebeo Outliner....I free hand drew everything with it, so that's why it's all a little wonky..another subliminal me...messy, not patient... 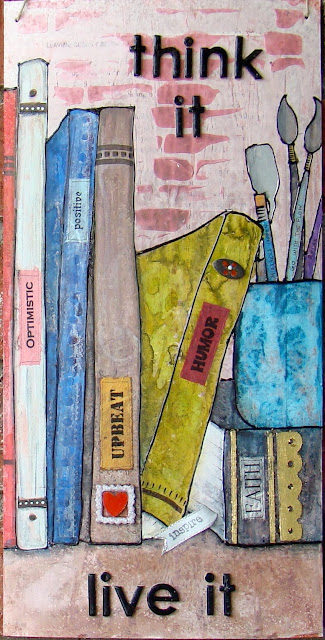 I cut a slit into the pages of the bible through the board to slide in the book marker ribbon and stamped inspired on it, because God's word does just that. Not that I think I am inspiring, but that I couldn't leave God out of this and He inspires me daily in my art. 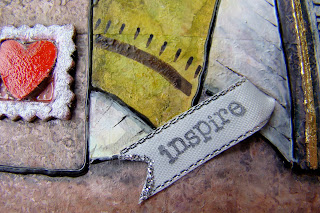 Love your wall hanging, the words on the books are a great idea. You are right, choosing 5 words to describe yourself is difficult, the only one to spring to mind is "honest" but then I ground to a halt! Oh and my son can real off that anti.... word far too quickly, they must have touched on it in school one time and that sort of thing really appeals to him. Thanks for the video. BJ

Wow - I am in awe. This is just amazing. Not only did you give us words but you gave us books and brushes and -- drawn freehand!!! You are truly an artist with a gift!

Well Webster aside, I think your art is absolutely supercalifragilisticexpialidocious!!!

This wall hanging may be your most artistic yet. I just love it!!!

The book theme here is pure genius, Sandee! Also love that exposed brickwork both in your wall hanging and in your WALL!! But, the great advantage in visiting your blog over just admiring it on Facebook is that I was able to see the "fine print" on your brushes and pencil!! Kudos to you!

Loving this Sandee!! Love the bookmark tucked into the Bible. Tell us more about the Pebo Outliner? Is that something by Pebeo?

Great project and I loved the words you added.
Yvonne

Great project! The colors are so pretty!
Pam
scrap-n-sewgranny.blogspot.com

Sandee, this is incredible!!

I really love this Sandee ... the fact that it's a picture of tangible things with so many meanings makes it spectacular! I hope you continue to be inspired by God's Word. Thanks for sharing!

LOVE this and I went ahead and posted it for you to the Creative Dare! ♥

I love the way you did this on the books glad I came to have a closer look on the blog as I missed you had more words on your brushes, that is so cool. Love it..
Sandy :)

This is just fabulous! I love how you incorporated so many other things about you into it. Why can't I ever think outside the box like that? And your brick background, love it!!