built of red brick
or
of, relating to, or being the British universities founded in the 19th or early 20th century 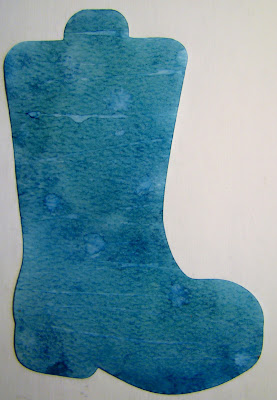 Since you could not make out the flowers from the stamps; I glued some on where they were suppose to be and added a pink rhinestone to the center of each. 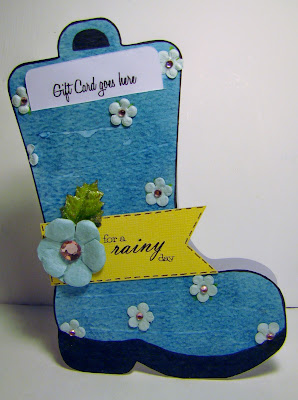 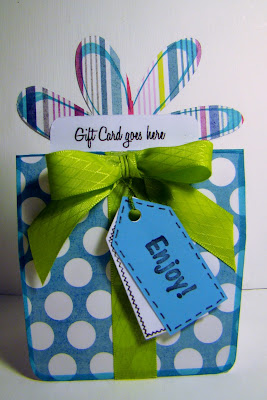 I'm the world's worst stamper. That why I usually try to avoid stamps. They and I simply don't go hand in hand. But you did a fantastic recovery with that boot.

I'm loving your gift card creations! Both of these are brilliant, hugs Carole Z X

So adorable! Your wellie card is so precious. I thank you for linking how this is done. I have not tried that, and am curious now. What a great sentiment for the card and gift card. Your birthday card is adorable for the SSS challenge. Love the stripes and polkas together!Have a great weekend!

that boot is just way too cute-- awesome projects sandee!!

You are really thinking outside the box with these holders. Super cute!

Hello Sandee, I just love your cards! That little boot is just darling!
Just wanted you to know that I haven't dropped off the face of the earth! We got moved, now the task of getting everything in it's place and organized. It will still be a while before I can participate in the challenges, my craft room is not set up yet (it's driving me crazy). LOTS of aches and pains!
Hugs,
Pam
scrap-n-sewgranny.blogspot.com

Fabulous projects. My fav is the darling boot. LOVE IT>

Great idea and perfect for a rainy day! Love the pop of yellow. Thanks for joining us at Inkspirational

These are absolutely adorable! That boot is just way too much fun! Thanks so much for playing along with us over at the Simon Says Stamp Challenge Blog!

Stinky or not, I like your water stamped boot and how clever you added the flowers, Sandee! ;)

Took several attempts with me too until I got a satisfying water stamped result...

Thank you for joining us at TTT!

Love the boot. It looks so cute. Im sure goin to try and make myself one some day.
Thank you for joining us at Fab'n'Funky.

Sandee, your boot turned out swell. Had to laugh when I read about your stamping troubles...happens to me all the time! I'll check out the water stamping link...that's new to me! Got a 70 degree afternoon after 37 yesterday...it's lovely. Hope your hills are the same. TFS & Hugs

These are awesome, Sandee!!! LOVE that boot idea--too cute! Thanks for joining us at Inkspirational! :)

PS: Thanks for joining us at Technique Time Tuesday, too!!! :)

Beautiful Sandee...adore the Wellie card and you know I would looove a pair of wellies like this for my allotment...Happy feet I would have for sure.
Big hugs from a rare sunny day it has been in Scotland.
Tracy
xoxox

Wonderful wellie and a great recovery on the stamping. I can totally relate - I usually have more ink on me than the image. Thank you so much for joining us at Fab'n'Funky this week. Pat K x

I love your wellie boot gift card holder Sandee - so whimsical and fun! The 'for a rainy day' sentiment is just perfect for the card! I love the pretty flowers too!
So nice to have you playing along with us at Inkspirational again, please come back soon! Ruth x

how cute, thanks for joining us at FnF :)

This wellie is adorable! I'm sure whoever gets it as part of their gift will love it :)

Wow Sandee! Two fabulous cards! They are both so creative, but then you always are the creative one! Love the water stamping and boot theme LOL. And the second one is just so cheerful! I love that they are gift card holders too! Thank you for joining us at TTT AND Inkspirational!
hugs,
Ellen

Gorgeous blue welly - love it! Thank you so much for joining us at TTTC for the water stamping challenge! We really appreciate the fact that you have taken the time to 'play' along with us and hope to see you again Karen P Technique Time Tuesday Crew http://stampinginpink.blogspot.com/

Both projects are great! I really adore the rain boot! Thank you or sharing at Inkspirational.

This is perfect for a rainy day! This boot is so cute and I love the flowes! Thank you so much for joining us at Technique Time Tuesday! Is it ok if I put you card on our Facebook page?

What a cute idea! Lovin' the wellie! Very nice save with the addition of the flowers! The water stamping technique can be a little tricky but you did a great job! Thanks for joining us at Technique Time Tuesday! :)

Love the blue wellie- What a funky card!Thank you for joining in with our challenge at Technique Time Tuesday - we're so glad you did!

Love the wellie boot, perfect for stamping in water! Thank you for joining us at Technique Time Tuesday.

love the unusual card shape! Thanks for joining us at Card Makin Mamas. x

This card is tooo cute for words. Love all of the little details you added to finish off your project!!! So happy you joined us this month at Technique Time Tuesday, really hope to see you back again to play along next month :)

LOVE your water stamped boot ~ it's Fantastic!!! Thank you so much for joining us this month at Technique Time Tuesday!

What a fun card. Love the rainboot and what a fabulous card for showing the water stamping technique. Thanks for joining us at TTT - Karen, DT