Next I cut out the envelope which holds the GC, again from Doodlecharms, p. 86 but removed the heart cut on the envelope in the Cricut Craft Room and extended the flap cut by hand so that I could slide the gift card up and under the flap. Stamped the Ho, Ho, Ho by Karen Foster on the flap and added a Martha Stewart poinsettia sticker on the corner to add some balance to the red flag. Outlined everything with a Faber Castell PITT pen. 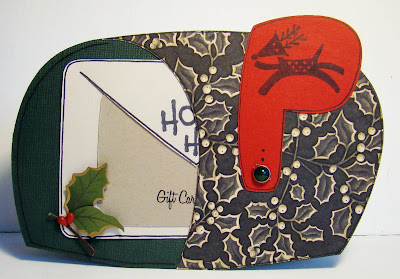 Although the picture doesn't show it very well, it's actually a card, so the whole 'mailbox with GC' is the front of the card, leaving the person that sends it, a traditional inside to write their greetings. 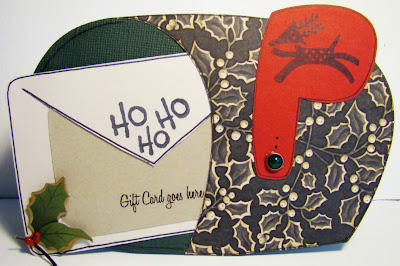 Congrats on selling so many cards.

this is just way too cute!

What a cute and unique GC holder. Love it.

Have a great day.
Hugs Nana
♥ My Crafting Channel ♥

This is adorable! Super clever... love the poinsettia! :) Thank you for joining us in "Anything Goes" challenge over at the Simon Says Stamp challenge blog this week! xxo

this is so cute! I love the reindeer! I am so glad to hear about all your card sales - you are doing so well! xx

This is flippin adorable, Sandee!! Your creativity is endless!

Creative AND clever. Those are important elements, too. Sounds like you have a successful business if you make more than you spend to rent the space. I'm curious about the plaque/wall hangings you make. That is what I'm interested in making.