a private showing or preview of an art exhibition 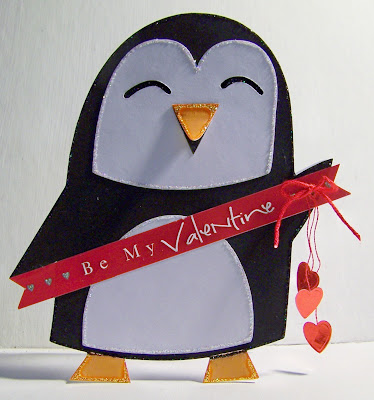 OK, so I adore this little penguin ♥
I added some dangly hearts just because he looks so full of love, and I always enjoy creating some movement to my creations. I simply took heart stickers and placed them back to back after adding a single thread of floss between them. Knotted the ends together, tied a bow separately and glued them to the banner. 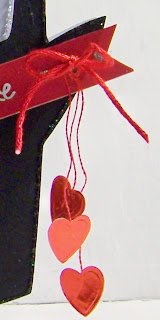 Hi Sandee, I just love the words you show each day and especially today as I have never heard that word before! Love your penguin and he looks mighty fine with his little dangley hearts and I really like the 'pleased with himself' look on his face. Hugs, Anne x

Aww look at this cute little penguin! Penguins have to be one of my favorite animals. They're so adorable and so is your card. ♥

Lovely little peugo. What a difference 2 days make, we have had approx 5 inches of snow this morning, the southern part of the uk seemsto have ground to a halt. Love Francesca

Is your photography class over? My photo group kind of went by the wayside. Could be the cold weather here....

Aw! He is just adorable! I love him!

OMG, what an adorable penguin!! How ever did you get him to stand up? Super job, Sandee! Thanks for joining the DCD challenge to share your creation!

Have I told you how much I love penguins??? Yours is especially adorable!!!

He is super super sweet. Love his banner and hanging hearts.

Super cute....love your penguin. Thanks for playing along with us at DCD!! Lee-Ann :)

This penquin card is so super cute!
Thanks for joining us at DCD this week!
Gerda
http://cardscreations.blogspot.com