to regard with extreme repugnance : loathe 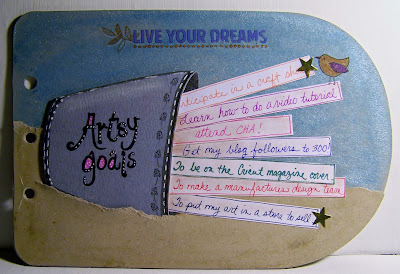 I totally agree with carrying over resolutions - here's to hoping you achieve some more of them this year.

I totally agree about Craft Shows. The one I did was inside but it was such a hassle.... enhanced by the fact that I slept through my alarm! Oh no.

Some of the sayings in that book are extreme. I'll send you an email with some examples.

I wouldn't mind going to CHA either.... I just found out about it this year. That's how out of touch I am!!!

Good luck with your goals. I'm sure you'll be on the Cricut cover this year!!!

What a darling mini-album, Sandee! Keep calm and carry on!!

Thankyou so much for letting me know I am not alone!! Will carry on uploading to picasa web. Happy Sunday, jenx

Thankyou for letting me know I am not alone. Will carry on using picasa. You seem to like words... Have you checked out the uk blog The Inky Fool? He finds ancient English words and defines them and also explores the history of words and how we came to use them the way we use them. It is a bit eclectic but good fun! He has published two books on the same theme. Happy Sunday, jenx

Hi Sandee, well done on achieving two of your goals, that was some achievement in itself, hope all the others follow suit this year too. I agree with Darnell above, Keep calm and carry on' - you will get there... Hugs, Anne x

what a totally fun mini with your goals!! love it

I love your album and really respect that you not only make resolutions but you even try to keep them. Good job!! I hadn't made any in years and then this year made one, it was to start an art journal and I did! Good luck in keeping/reaching your continuing resolutions!!

I love how you have all of your goals recorded!

fabulous page. love all the resolutions.

What a great way to document your accomplishments from your "bucket list" this year. Glad to see you already accomplished 2 of them! Thanks for sharing your project with us over at the Frosted Designs blog.

Cuuute! LOVE this idea!! I really really love that little bird :) Thanks for joining us at Anything But a Card! :) :) :)

oh... i like this. esp the bird perched on top of the journalling strip.