Santa can't possibly be a man!

(Just thinking about Santa, I mean he can't be a man...we all know men cannot pack....)
We started out our night at a fabulous restaurant featuring California Mexican dishes. I had a frozen mango daiquiri which was delish! And chicken with sour cream enchiladas that were a taste of heaven. I truly could have ended the night there having dinner with friends and enjoying the conversation! Of course ( for me ) the best event was when they refer to me as the baby of the group, I'll take that compliment anytime, thank you very much!!! 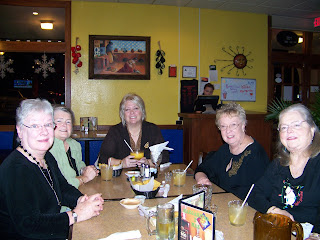 (And still thinking about Santa here....I mean, Men would rather be dead than caught wearing red velvet.)
My friend Shirley took me to The Flat Rock Playhouse to see a production called Plaid Tidings. ( thank you Shirley!! ) From what I can gather from the history, this theater was established in 1952. It is small, but quaint! 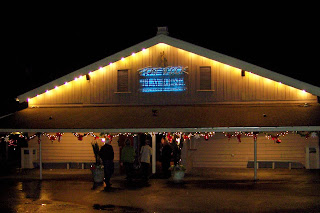 (Ya know, here's another thought about Santa as a man...Men aren't interested in stockings unless somebody's wearing them.)
Then Shirley took us on a Christmas light adventure, this house was over the top but extremely tasteful too~ I wish I could have gotten a better picture of everything they had up! wow, the work they put into this is amazing! 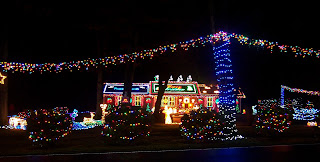 so...Santa can't possibly be a man!
Men would feel their masculinity is threatened...having to be seen with all those elves.
Men don't answer their mail.
Men would refuse to allow their physique to be described even in jest as anything remotely resembling a "bowlful of jelly."
Having to do the Ho Ho Ho thing would seriously inhibit their ability to pick up women.
Finally, being responsible for Christmas would require a commitment.
just saying ;) ho ho ho!

and I am still hoping for some support from my fellow crafting buddies, please help me re-build my "followers", I really do appreciate every one of you that help me out during my reconstruction phase!
Posted by SandeeNC at 8:00 AM

So funny about Santa can't possibly be a man....Sorry about your blog, I am new to all this and did not even realize you could lose your blog. UGH!
Thanks for your sweet comments..joann