Well, that title might be a little mis-leading for some ( whose minds are in the gutter, usually that's where mine is...) but what I mean by "touching my art" is that sometimes I go back later and put more "touches" on a piece or sometimes I have been known to drastically change a piece of art. It just depends on what the piece had been "telling" me. They do talk to you if you are willing to listen.

This is the finished and re-touched piece which will be going on display at our local library. I will be bringing it in today to be set up with the other works on art for the month of September, I am looking forward to seeing what every one brings in for the exhibit. 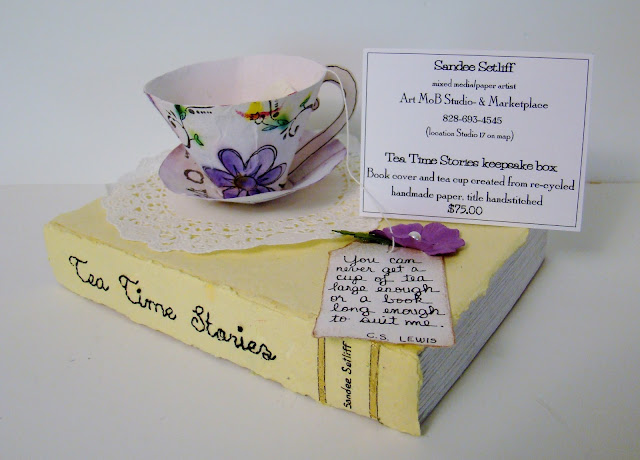 This is what it looked like before...sometimes, when I put a lot of work into something, I am just tired and do consider it done. And some times I know that there is more work that I should...I could do on it, but I'm not willing to at that moment. This is one of those pieces there were several things I knew I wanted to work on and knew I would be "touching" it at a later time. 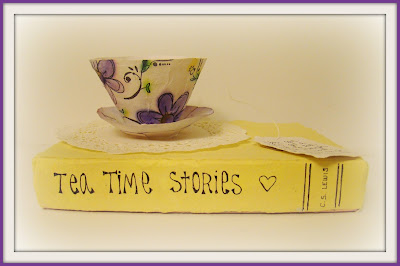 First off, I knew, even when I considered it "finished" that I did not like the title on the book spine. I had tried to do it while it was already on the box itself so it wasn't as good as I knew it should be. However, I had some yellow handmade paper left over and made sure to keep it so that I could come back and fix it. I didn't know I was going to hand stitch the title until yesterday...it just came to me and I love how it turned out. I actually love to hand stitch words, they always look great. I also moved C.S. Lewis up to the quote, put my name on the spine and gold leafed the bars. 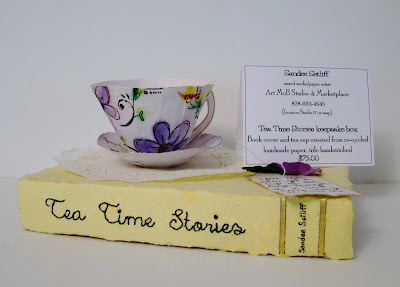 I edged the tag in some pastels and smudged it to give it a tea distressed feel and added a small purple flower which I think matches to the flowers on the tea cup itself. 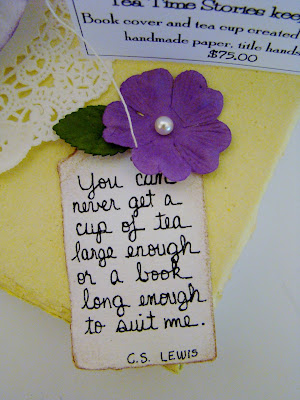 Then I had one of those moments where I wonder if it's a great idea or if it's going to ruin the project entirely. Sometimes I think I am teetering too close to the edge of an artistic cliff but I am usually willing to jump off of it anyway...just hoping it doesn't end in a disaster, lol In this case it was adding lipstick to the rim of the tea cup. Yep, I put on lipstick and "kissed" my cup. There is a little DNA left behind on all my art I think. 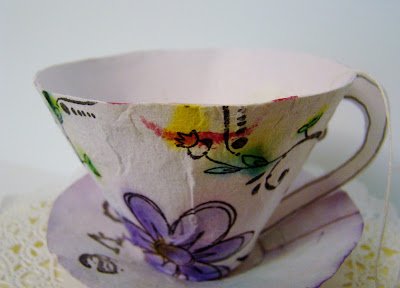 I did do it very lightly so maybe the lip impression isn't that great, but I was freaking out that it might not work, but in the end, I think I like the little personal "touch". 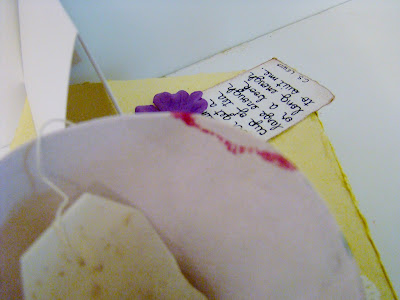 So, is there a moral to this story of touching your art?
( Is your mind still in the gutter? I know my mind traveled there...)

This is beautiful Sandee! I especially love the little teacup!!

How lovely! This is just my cup of tea (pardon the pun). I LOVE my tea, hot or iced.
You did a fantastic job! I love the title of the book and that you put your name on it. The teacup is darling and the lipstick print is adorable. Love the little aged tag.
Pam
scrap-n-sewgranny.blogspot.com

Okay, way cool how you stitched the title of the book! I happen to love the added 'touch' of the lipstick.....very fitting for the tea cup. Fantastic piece of art and I'm very happy you came back to "touch your art' again.
Yvonne

I love the touches!

You are amazing. Luv luv luv the lipstick kiss

Lucky I checked back, because I commented on this via the iPad a few days ago and look...it never posted!!! This is a fabulous piece of work and will be so eye-catching on display! Beautiful!Hugs Carole Z X