When Flat Susan arrived I set her up in the awesome lodgings of the Smokey Mountain Retreat. A beautiful bed and breakfast Inn where she could enjoy the mountainscapes of North Carolina. The forest straddles the border between North Carolina and Tennessee. Susan said she wanted to get a taste of our southern Appalachian culture. 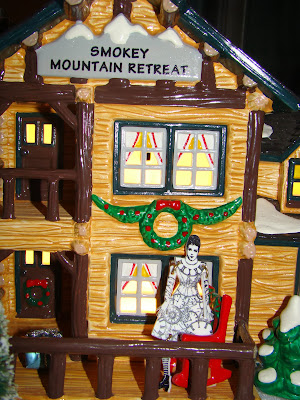 Susan discovered that in North Carolina there are 1,600 growers producing an estimated 50 million Fraser fir Christmas trees growing on over 25,000 acres which represents 90% of all species grown in North Carolina. She was impressed that we are ranked second in the nation in number of trees harvested. 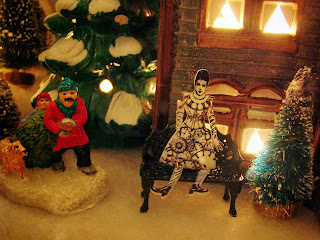 After her educational tour of the Christmas tree farms, Susan took an afternoon to watch some local kids playing hockey at a nearby school 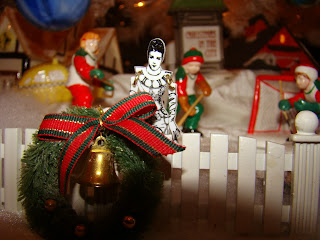 They invited her to their clubhouse where she was given the honorary title of the "only girl allowed". They also built a snowman and she loved playing in the snow. 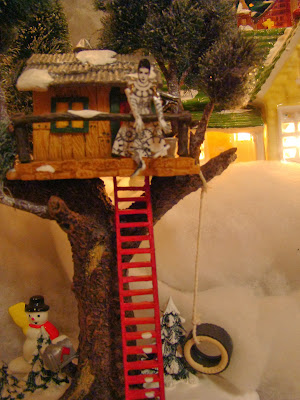 Unfortunately, she could not get a grasp of the tire swing, and the boys said she wasn't fit to be a member and they kicked her out of the club because she was, after all....a girl. 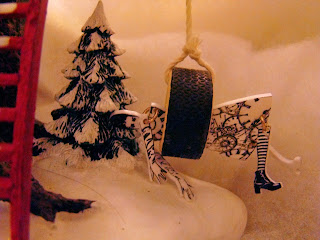 Susan, dejected and rejected from the boys club, went to visit Santa in the hopes that he would cheer her up. Santa had other plans for Susan and decided that reading 50 Shades of Christmas to her would be thing to get her out of her slump. Susan kept wondering if Santa had a lump of coal in his pocket, or was he just glad to see her?? She could not decide...but he was indeed very jolly! 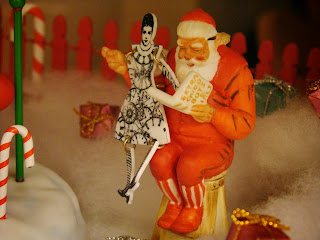 Santa, having claimed that Susan was indeed a very good girl indeed let her ride one of his reindeer. 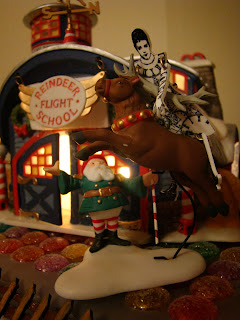 And the elves said that she could join their club any day and took her sledding with them and for hot chocolate afterward. They told her that they just like to smile, that smiling was their favorite thing...and Susan replied that the best way to spread Christmas cheer is singing loud for all to hear. :) 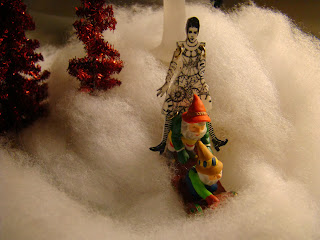 Next, Susan is on her way to visit Kimberley in Davidson, NC where I hope she will have a great time.

Susan looks like she had a blast in the Smoky Mountains! What fun! Reminded me of my camping trip there years ago with my late hubby. It surely is beautiful there! Hope you (and Susan) had a great Christmas!!

Looks like Susan had quite an adventure!! I am shocked at Santa!! Well, maybe not....

Loved the story of Flat Susan! Hope you had a very merry Christmas, Sandee!

What an adventure! Cool digs for FS to stay in too. Love the story line, Sandee. I think I knew a Santa like that.... ;) Hope you had a wonderful Christmas! Hugs

Loved Flat Susan and her Christmas adventures! Sounds as if Santa was a bit of naughty boy! I hope you had a great Christmas!
Pam
scrap-n-sewgranny.blogspot.com

Oh my goodness, Sandee, that has to be the best Christmas Susan will ever have! What a treat!! Even if she got kicked out, how many girls can say they were allowed in AT ALL??!! So fun!

I wish you all the best in the new year! Cheers! Darnell

You really know how to show a girl a good time -- maybe I should look into ticket prices.....