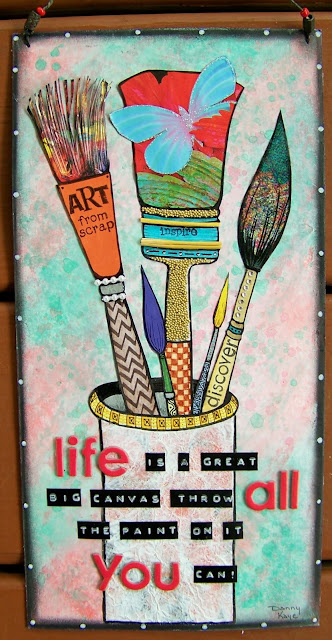 I used the Art Grip Aquarelle pencils to color in the brushes. I also embellished the brushes with rhinestones, beads and pearls. I used my Pitt Pens to doodle on them and the Pitt artist pen Big Brush to color the stamps and give each brush it's unique inspiration. 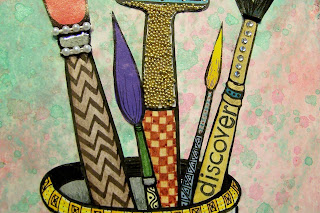 I took images from magazines to create the brush tips. 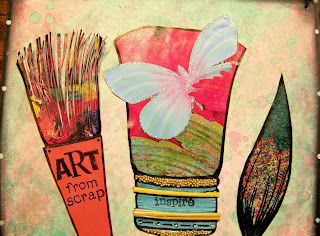 The writing is straight, promise it is, but this picture makes it look a little warped. I like the eclectic look of my Dymo Label Maker along with the chipboard letters. The texture on the jar was created by using a crumpled piece of kitchen wax paper and then glued on. 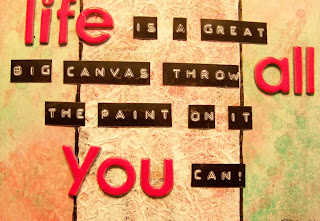 The edge of the board was made using my charcoal pencils, smudging it with my finger and then I used my American Craft Galaxy Marker to create the white dots. Strung with twie and beads ( some recycled from an old pair of sandals! )


entering this in:
Pin And Tack: #3 Anything Goes
Posted by SandeeNC at 4:34 PM

Hi Sandee, I love your wall hanging, it is so vibrant and that sentiment is just so true. Gosh, I can remember Danny Kaye, he was a wonderfully talented man. Not thought about him for years..... Hugs, Anne x

Oh this is so awesome! Love it. The colors are so vibrant!

Wow!! Your work is just amazing! Thanks for visiting my blog!

I loved Danny Kaye very much as a child and still love his films (as does our son)!

Your wall hanging is so gorgeous! Very creative and inspiring!

Your wall hanging is fabulous, so many techniques - brilliant! I love White Christmas, the early version and the later one. Danny Kaye was a rare talent! xx

Dang, you're good! Love the whole thing, but especially love the beaded brush and the brush on the left. The bristles look so cool! Is it paper?

This is a great hanging! The quote is fabulous, and I love the mix of chipboard and labels!

Hi there Sandee ah so agree love Danny Kaye when we were kids - his movies were the best - love work here and on the one above too! Shaz in oz.x

Oh, I loved watching anything with Danny Kaye in it! He bubbled with joy!
Great painting. :) :)

wow!! i found your page on google... this is beautiful.