The best laid plans of mice and men: paraphrase

No matter how carefully a project is planned, something may still go wrong with it.
From Robert Burns' poem To a Mouse, 1786.
It tells of how he, while ploughing a field, upturned a mouse's nest.
The resulting poem is an apology to the mouse:

...
But, Mousie, thou art no thy lane [you aren't alone]
In proving foresight may be vain:
The best laid schemes o' mice an' men
Gang aft a-gley, [often go awry]
An' lea'e us nought but grief an' pain,
For promised joy. 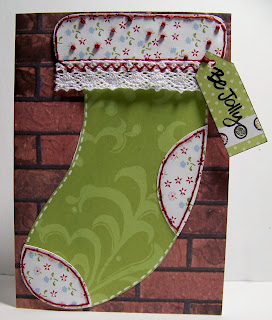 You can see a little better, a close up of the French knots, and the hand sewing for the cuff of the stocking. I also cut down a S.E.I. tag to make it size appropriate. Then stamped "Be Jolly", from an old Studio G stamp, finished it off with Ranger's stickles for glittered balls! 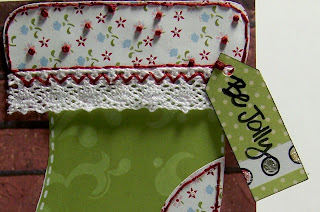 entering this in:
Perfect Sentiments Challenge - Bingo with a sentiment
( I went straight across the middle, lace, glitter, die cut )

Sending out thoughts and prayers to all those in the path of Hurricane Sandy. We are on the outside edge of it and have HOWLING winds right now as I am typing this post up. You can only imagine what it would be like to be in the direct path of one of these storms! I hope everyone stays safe!

This is a recording of the wind taken last night, it sounds almost like the ocean surf or a train rumbling by, but it's the wind. And mind you, this isn't directly in the wind, but the sound recording is on my protected balcony!
Posted by SandeeNC at 12:00 AM

Oh my, take care and stay safe!!!!
Your stocking is so cute...Hope the hurricane passes so the shoppers will be back out to the Art MOB!

I think you are going to be one of my last comments before we completely lose power here. I live in Long Island and we are about to take a direct hit from Sandy. The outer bands have started and I cannot imagine how much worse it is gonna get, but it is going to bad. I've been through a lot of hurricanes but the flooding and damage from this are going to be like nothing we've seen here before. Please keep us all in your prayers tonight at Mixed Media Monday. I hope that maybe by NEXT week's MMM I will have power back and be able to tell you all I am alright!

Love your stocking, no matter which way it hangs!

this is so cute!!

Super stocking and I'm so pleased you are safe. That wind sounds mega in your sheltered spot so only knows what it's like in direct path. Eeek. Take care Zo xx

such a cute card, and brilliant solution to getting it to open the 'right way.' really adorable. I am having trouble getting in the Christmas mood, so admire your early start!

I love your Christmas stocking. Great resourcefulness on your part to come up with the brick behind it!!! Great save!!!

This is such a great Christmas stocking. I love the brick background.

I hope you are staying safe. I cannot believe how crazy this storm ended up being. I think I was jaded from living on Long Island for years with so many "storm" predictions that turned out to be nothing more than a lot of rain, that I never expected Sandy to be this bad!

We are getting the effects of the winds here too! AJ said he could barely keep the car on the road on the way home from work last night. I had trouble walking to the train. The lake already started with huge waves that are overflowing onto the path (and hopefully not Lake Shore Drive!). And we aren't even anywhere near the hurricane!