Link Up For Pink
My final card for the Breast Cancer Awareness series. I will be curious to see if they sell in the store. This is a simple card, with miscellaneous paper, sticker letters and a ribbon. The gem is the same ones I used for the entire set, My Minds Eye. I colored in the letters with my Ranger's Distress Marker and the heart was filled in with stickles. 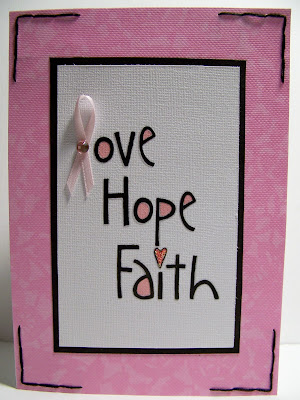 Currently, I am puppy sitting Max ( my brother's dog) and having a blast. I have really missed having a pet so I am enjoying myself immensely! Max, a Shih Tzu is 6 months old and loves to kiss....puppy loving is the best! lol 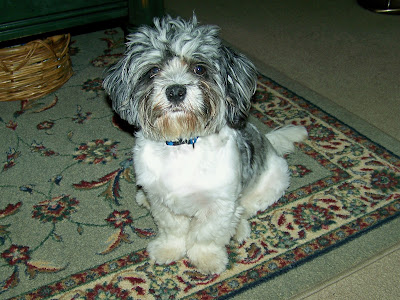 The origins of the Shih Tzu are unclear, but the prevailing thought is that the dog is a cross between Tibetan mountain dogs and the Lhasa Apso, probably occurring in the 1600s. The name translates to "lion dog," an indication of the high regard the Chinese had for that feline. The Shih Tzu held a high place among royalty in China, so much so that the breed stayed within that nation until about the 1930s. The popularity of the Shih Tzu took off when some made their way to England, with the Shih Tzu catching on in the United States in the late 1960s
Posted by SandeeNC at 12:00 AM

oh my this little puppy is adorable!!

Hi Sandee, another beautiful card today. Max is adorable, can see how you would have fun with him, he looks a little mischievous to me. Crafty hugs, Anne x

Yay! A little puppy to baby sit! He is adorable!! And totally makes me miss my Lhasa Apso Ben!

Another sweet card. :)
Max is sooo cute!! Puppies and kittens are the best entertainment, too. Who needs TV? LOL!

I have loved looking at your tribute cards and I think this one is my fav BUT even better than your cards is that adorable puppy Max!!!!He is precious!!! We are a nursing home around here. I recently lost my very old cat but still have my 2 old dogs, well one is a really old girl and one who thinks he is still a young buck... I don't think I could be without a pet friend of some kind and I just try not to think about losing my old friends...

Wonderful CAS card! Love the use of the ribbon in place of the L :)
Thanks for joining us at Link Up For Pink!!!

Beautiful card: simple, clean and elegant something I never seem to achieve. Great sentiment.
That little dog is drop dead gorgeous but sadly my nearest and dearest wouldn't go for one of those even if I begged!!
Juliaxx