I learned something new, well, new to me anyway, 😜
I have to admit that I have never used embossing powder with paint before, only with ink and then only with stamps but now I learned that it works great with paint and that has opened up a whole new area with mixed media! 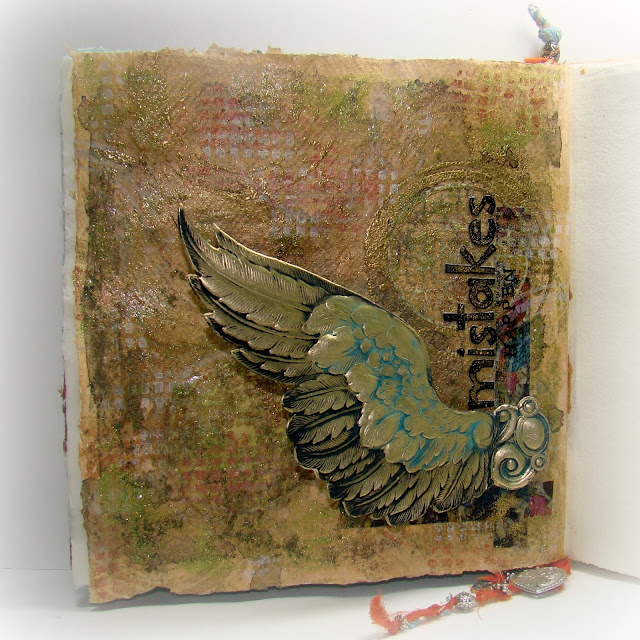 I'm like a kid with my first box of crayons, sheer giddy with excitement! 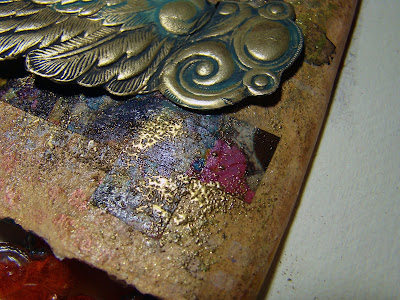 Still crushing on the Dresden trim, this time I used some Antiquing creams to knock some of the shine off the angel wing because the background is an explosion of glittery goodness between the gold embossing powder and metallic paints that I used. 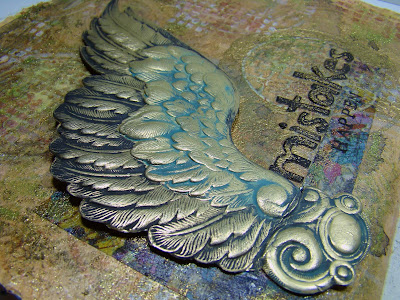 I typed out word strips and glued them to the back of the wing for some hidden journaling. You can bend the Dresden trim but I don't think it would stand up to repeated opening and closing but then I'm pretty much the only person who looks at my journals anyway so I'm thinking it will be fine. 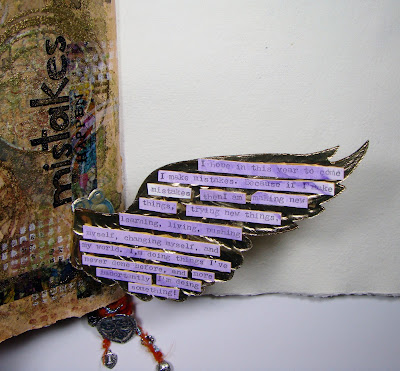 I'm trying hard to use up old supplies so I used some old vinyl letters, I had to use a gel medium to make them stick and then painted them black since they had polka dots on them. Somehow polka dots did not seem to work on this page, lol And yeah, added a sprinkling of embossing powder over them! 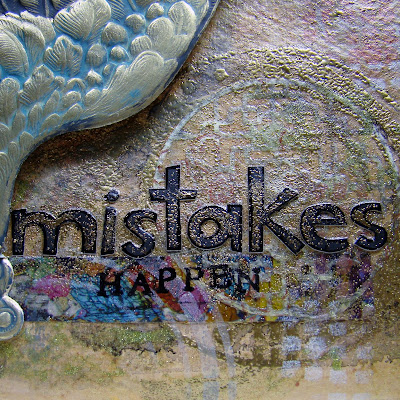 In hindsight, I'm not sure why I titled this page "mistakes happen" because I was really intending this to be another page to go along with my WOTY hope which is used in the writing on the back of the wing.
A mistake?...maybe...but they do happen! 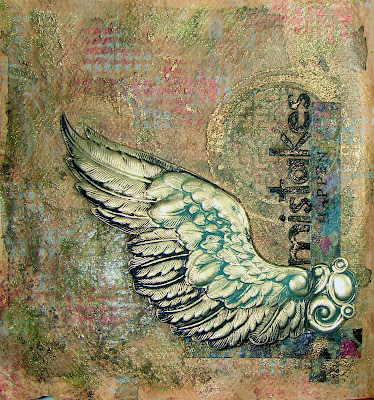 Linking up to Paint Party Friday
Posted by SandeeNC at 12:00 AM

Beautiful mixed media project! I have so many embossing powders I could cover books of pages with them:) I should use them more. Happy PPF!

This is gorgeous! Love the embossing powder!

Happy Weekend to you,
A ShutterBug Explores,
aka (A Creative Harbor)

oh this is amazing!! Its beautiful,, words and art! mistakes happen for sure but this painting is not one of them,, Its gorgeous!

Outstanding Sandee!! sorry to tell you, but you will now be hooked- embossing powders on everything! lol

This page is gorgeous! And the way you brought that wing front and center is brilliant!!
Jackie xx

So cool! That looks absolutely fabulous! I love how the wing pulls out with a message behind it. Really neat. And the embossing power looks great. I've never tried it before either but you're making want to buy it, LOL :)

A wonderful piece! I love it when I discover something new about my art supplies :) Happy PPF from Number 28 :)

It's awesome! Love the page so much! neat learning that about embossing powder. Your mixed media is fun.

What a brilliant idea to add the journaling behind the wing. I see embossing powder in all of our futures. So much texture and fun.

What a lovely project! I have never tried embossing powder with paint either. Love the hidden message. Happy PPF!

I love this page! Such yummy textures. I will have to try embossing powder with paint now too...such a beautiful effect!

Sandee, I love this page! There is something so strong and hopeful about it. Something that says "It will be ok. I've got your back. You will be unharmed." There are mistakes. Some of them bad. But there is also redemption. This is what I thought when I saw your page. Wow, even in writing mistakes happen, your spirit shows your hope. Marvelous!

On another note, I have embossing powder paranoia. It seems like everywhere I turn it's there, staring at me. First you lovely Tribe sisters, then the Christmas gift from my sister, now this. I feel I am going to be covered in embossing powder sometime soon. And now I find out that embossing powder can be used on paint?! Have mercy.

This is really beautiful. A great combination.

I am ohing and awing over here, that is beautiful

wow, this is gorgeous adn it seems like soo much fun. It is good to "make mistakes# now and then.

Thanks for sharing. I really enjoyed the layers and colours. I am interested in the embossing powder in paint. What does it do?

This is awesome Sandee! No mistakes here ;) (And you know that I'm super excited that we've got you addicted to embossing powder... lol.)

Beautiful work!
Aha moments are like candies but 'taste' remains longer :)
Have a good year 2018!

This is fun stuff!