According to the law of physics,
thoughts direct energy and energy follows thought.

Last night was the new moon and I decided to do this ritual   ( or at least close to it ) I'll take you step by step how I interpreted astrologist Molly Hall's suggestions. Whether or not you believe in the power of the moon is not important, but practicing rituals of positive thinking will indeed benefit you.

Gather Sacred Supplies: I had purchased these stones on a day trip with one of my friends Marcy up to Asheville so I thought they would be perfect for adding a symbolic property to my ritual. Being an avid art journaler I knew I was going to like this ritual as it said that having a small journal on hand was a great way to record your intentions. 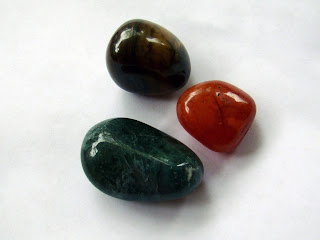 Preparing for the Ritual: I didn't have sea salt nor a bathtub as suggested but I had a sea salt scrub and a shower so I went and took a shower and scrubbed away all the negative energies. Using my previous mantra from the full moon rituals I kept repeating "this no longer serves me" after thinking of a negative action I wanted to stop doing to myself.

Grounding: This worked out well, as one of my stones is Jasper, a grounding stone so I visualized the suggested technique while holding the stone against my heart.

Your New Moon Wishes: and Dreams of the Soul: I combined both of these into one and wrote everything down in my journal with a water soluble pencil because I planned on using an "underwriting" technique common in art journaling when you really don't want to have what you wrote to be visible to anyone else.

Symbolic Acts: This is where the article states, "it's time to be creative" and I can smile at that because my creative juices began flowing the minute I started reading the article, lol I would like to take a moment to express that the only thing I am adamant about is NOT releasing helium balloons, they are harmful to our wildlife and to our environment but you get the idea, she means to use something to inspire your intention-setting ritual. For me, that turned out to be journaling, and for you, it may be something entirely different.

Keep them Alive: To do this I have placed my stones in this lovely pouch and placed them by my bed so that every night up until the full moon I can take them out and mediate what I worked on in my journal. Meditating/praying is also a great way to relax you before sleeping to clear your mind and it takes time to learn to focus on one thought and not letting your mind wander so don't be discouraged but keep working at it.


And here is my completed art journal page. 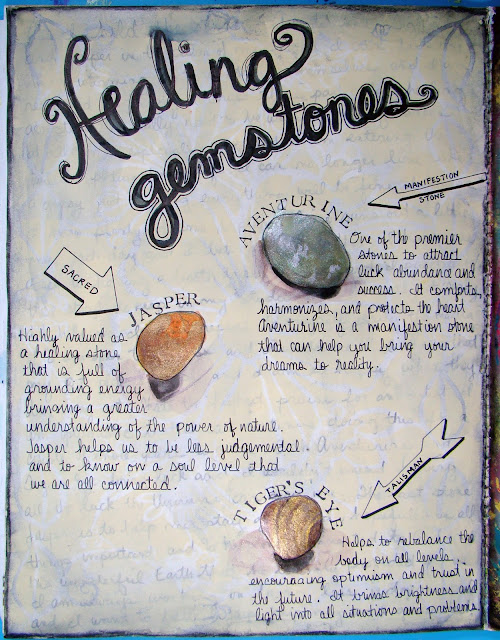 I hope this inspires you to think positive thoughts and to get into the practice of meditating every day on them and hopefully you will begin to see some results. I also have a Facebook group called Moon People if you would like to join us.

Very interesting post, seems like something I should try. I know I have a lot of pretty stones I have purchased (I just don't know which ones I have).
Pam
scrap-n-sewgranny.blogspot.com

What a lovely journal page. Meditation can be very soothing.